Artist, art critic, educator, social thinker and polymath, John Ruskin (1819-1900) devoted his life to the pursuit of knowledge, justice and beauty. To mark the bicentenary of his birth, a new exhibition produced by Two Temple Place, Museums Sheffield and the Guild of St George, will celebrate the legacy and enduring relevance of Ruskin’s ideas and vision. JOHN RUSKIN - THE POWER OF SEEING will bring together over 190 paintings, drawings, daguerreotypes, metal work, and plaster casts to illustrate how Ruskin’s attitude to aesthetic beauty shaped his radical views on culture and society. 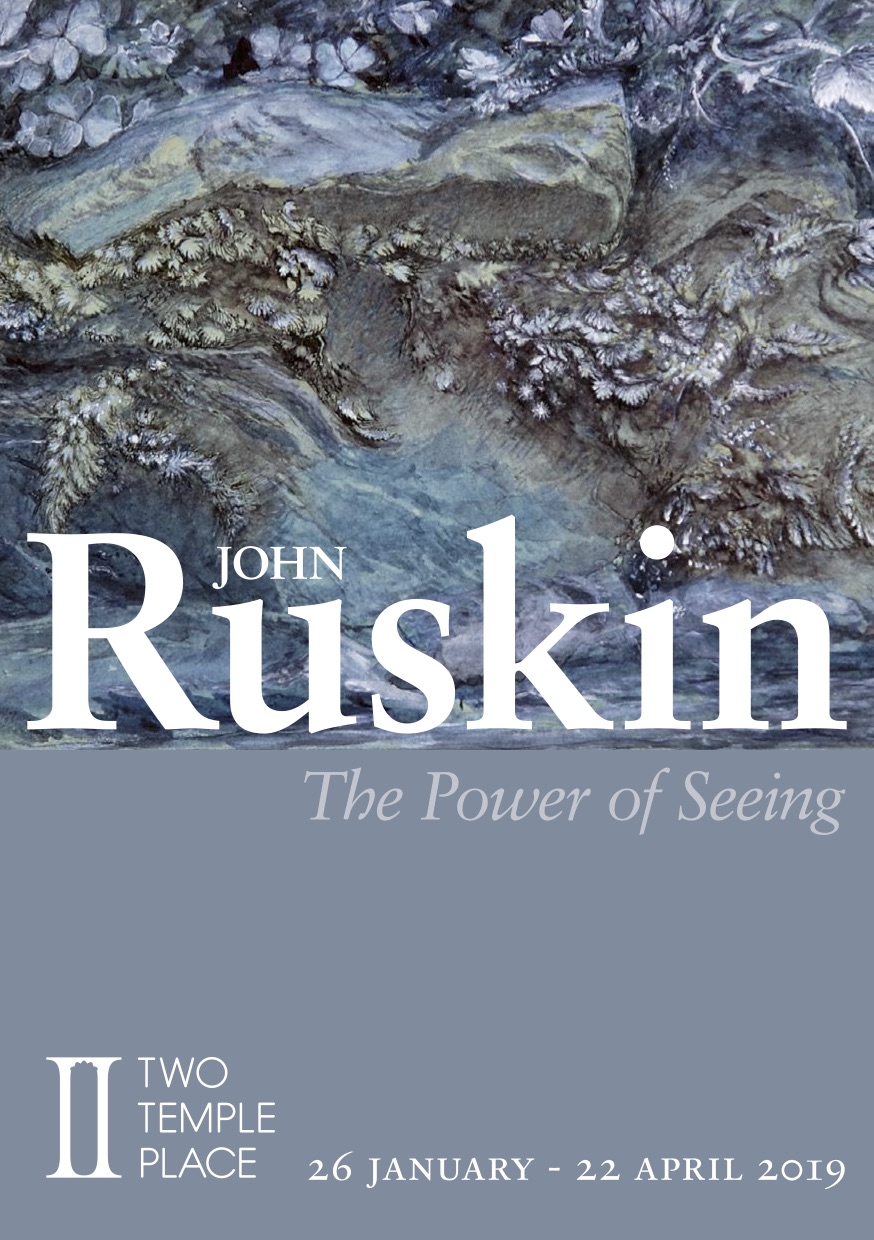 “We are excited and proud of the opportunity to display in London a wide range of treasures from the unique collections Ruskin gave to the Guild for the people of Sheffield, and cannot imagine a better showcase for them than Two Temple Place. In his bicentenary year, alongside our events in Sheffield and the Wyre Forest, we anticipate that the exhibition, brought together with such care by our partners at Museums Sheffield and The Bulldog Trust, will contribute significantly to deepening a wider public’s awareness of this extraordinary figure and his continuing relevance in the world today.”
-- Clive Wilmer, Master of the Guild

The exhibition will reveal how Ruskin’s influence is still felt today in current debates on arts, education, the economy and the environment. Fundamentally, Ruskin wanted to make Britain a better place to live in. Ruskin’s work in social and cultural politics went on to influence many leading figures, including Gandhi, William Morris, Leo Tolstoy, Marcel Proust, Ebenezer Howard, architect of the Garden City movement, and many founder members of the Labour Party. His name is also cited in the foundation of the National Trust and in the origins of the Welfare State.

A staunch advocate of life-long-learning and the importance of observation, close-looking and drawing, Ruskin believed progress could be made by making art, books and cultural treasures available to all. With the help of the Guild of St George; the educational organisation which he founded in 1871, Ruskin created an eclectic collection of watercolours, drawings, prints, plaster casts, minerals, illustrated books, and manuscripts, and established a museum in which to display them in Sheffield.

Whilst holding a deep admiration for the skill of Sheffield’s metalworkers and artisans, Ruskin felt Sheffield’s workforce was confined by modern industry. He therefore founded St George’s Museum as an educational resource to engage, inspire and enthral local workers. The museum was installed in a house on a hilltop to entice people out of the smoky city, offering views over the Derbyshire landscape and a space to inspire creative thought.

“Ruskin amassed this collection with a singular purpose – to captivate and inspire its audience, and compel them to action. This exhibition is a visual exploration of the radical, prescient notion at the heart of his philosophy: that in opening ourselves to beauty we can find a more enjoyable and enriching path through our fast-paced and rapidly changing world. Ruskin spoke of ‘a power of the eye and a power of the mind’ that would help us to see, rather than simply look. This exhibition will show exactly how he thought that could be done.”
-- Louise Pullen, Curator of the Ruskin Collection, Museums Sheffield

John Ruskin: The Power of Seeing will mark the first time Ruskin’s remarkable collection will be shown en masse outside Sheffield, featuring examples of his own work alongside paintings, drawings and photographs by Ruskin’s contemporaries including J.M.W. Turner, George Frederic Watts and John Wharlton Bunney.

The exhibition will showcase significant objects from The Ruskin Collection including Ruskin’s St George and the Dragon, after Carpaccio (1872), and the ‘De Croy’ Book of Hours, an exquisitely illustrated religious manuscript dating from the 15th century. Bunney’s striking 231cm x 152cm oil painting Western Façade of St Mark's Basilica, Venice (1876-82) will demonstrate Ruskin’s fascination with the architecture of Venice, while his deep passion for the natural world will be represented by carefully-observed studies of botany, geology, ornithology and landscape including John James Audubon’s White Pelican (1836) and an array of dazzling minerals and geological specimens. The exhibition will also feature examples of hand-crafted furniture from the original St George’s Museum.

“In establishing his collection in Sheffield, John Ruskin recognised the skill of the city’s craftspeople and sought to inspire them to new greatness; the collection in turn became one of the city’s greatest treasures. We’re delighted to collaborate with the Guild of St George and the Bulldog Trust to celebrate Ruskin’s remarkable legacy with this exhibition at Two Temple Place and the subsequent exhibition at the Millennium Gallery later in the year.”
-- Kirstie Hamilton, Director of Programmes at Museums Sheffield

In addition to Sheffield’s Guild of St George Ruskin Collection, John Ruskin: The Power of Seeing will draw on the rich collections of both regional and national public museums and galleries, including the Ashmolean Museum, Oxford; Calderdale Museums; The Fitzwilliam; Gallery Oldham; The Ruskin Library, Lancaster; Leeds Museums and Art Gallery; Tate; Watts Gallery – Artists’ Village and the William Morris Gallery. Key loans include Ruskin’s Kapellbrücke, Lucerne (1861), on loan from The Ashmolean, and J.M.W. Turner’s Pass of St Gotthard, near Faido (c.1842-3) and Venetian Festival (1845), from Tate Britain.

The exhibition will also feature newly commissioned works, including a site-specific installation by Timorous Beasties, a new moving image piece by Dan Holdsworth and contributions from artists Hannah Dowling and Emilie Taylor which will explore Ruskin’s contemporary legacy.

In continuance of the Bicentenary celebrations, John Ruskin: The Power of Seeing will be complemented by a further exhibition at the Millennium Gallery, Sheffield from 29 May – 15 September 2019.

The Ruskin exhibitions in London and Sheffield are made possible thanks to generous support from The Garfield Weston Foundation, the Foyle Foundation, the Sheffield Town Trust and the James Neill Charitable Trust.