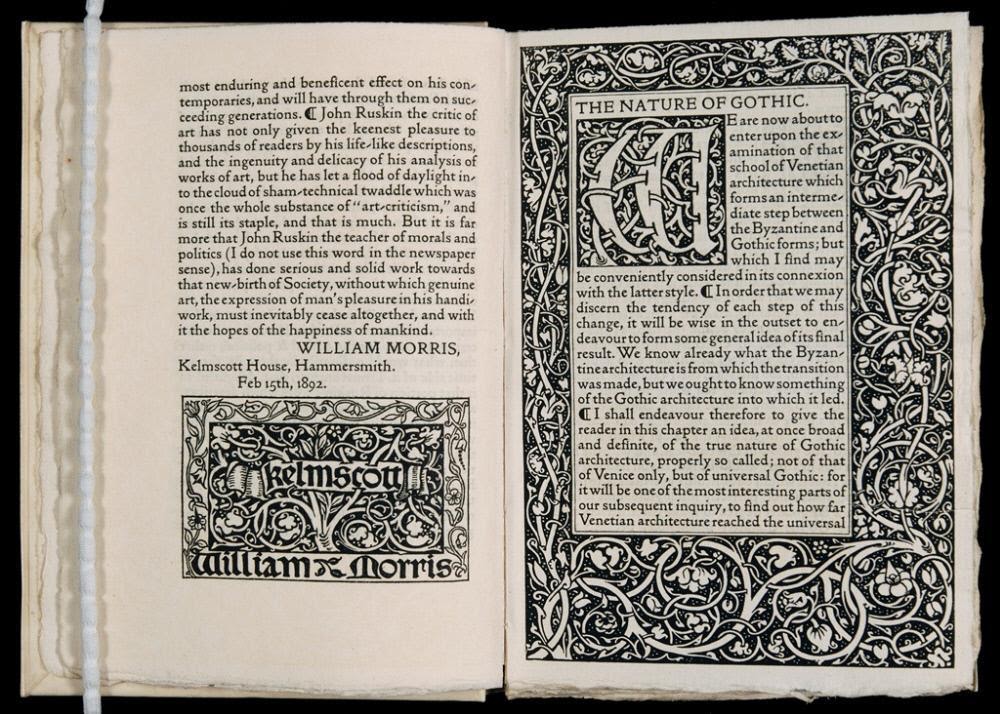 John Ruskin travelled a lot across Europe, including France, Belgium, and Italy. When on these trips, he looked at different types of buildings that he called Gothic. He wrote about this and his observations and ideas have helped people understand Gothic Architecture, what it means and why it matters.

We can look at Ruskin’s ideas to understand what the Gothic style and genre have to say about society and our imagination.

The Gothic is a highly popular genre, and people of all ages enjoy a variety of gothic-themed television series, novels, and films. Dark tales and hidden secrets are common in Gothic novels and films, as are eerie locations such as haunted castles or monsters such as vampires. The Gothic illustrates things that are unusual from our everyday lives.  Most of us do not live in a spooky castle, however, the Gothic stories and characters show topics that people could be concerned about in real life. Family-friendly films like Hotel Transylvania and The Addams Family, for example, have Gothic settings in spooky mansions with creepy characters. Many of us may sympathise with the characters who feel rejected and isolated and we may share similar concerns. Most people are familiar with the Gothic novels Frankenstein and Dracula, both were written at a time when the world was changing quickly. People were gaining a better understanding of science and the world around them. The monsters in the stories are a symbol of people's fear of the unexpected changes.

John Ruskin did not talk about Gothic stories, monsters, or haunted houses. He did spend a lot of time talking about Gothic buildings. He looked at a cathedral in Northern France called Notre Dame d’Amiens. He said it was ‘the loveliest Gothic architecture in the world’. Notre Dame d’Amiens was built between 1220 and 1260 and it looked very different to other buildings at that time. Buildings at that time, normally were created to look beautiful and perfect. They looked very different from the Gothic buildings we now see all around Europe. Gothic buildings looked less perfect and rougher around the edges. However, this is what makes the buildings so interesting and special. Instead of trying to make a perfect building, the workmen had the freedom to use their imagination. So, even though the buildings are not perfectly built and symmetrical, they are still beautiful buildings that people enjoy looking at.

Ruskin said that gothic buildings have pointed arches, vaults, flying buttresses, and large windows. This picture of artwork by an artist called Frank Randal, from the Sheffield Museums collection, shows the Apse of Notre Dame d’Amiens. We can clearly see its Gothic characteristics such as the large open windows. Ruskin said that the Apse was ‘formed merely of a series of windows, surmounted by pure gables of open work’.

When we read or think about what Ruskin says about Gothic buildings, we can also think about how what he says may be important when we think about the Gothic fiction that we read and watch. The builders who worked on the buildings would have been inspired by what they saw, felt and the nature around them. In his book The Seven Lamps of Architecture, Ruskin asks people to ‘consider how much intellect was needed in architecture, and how much observance of nature before he could give expression to these various figures’ and to ‘consider the amount of sympathy with human nature.’

So, if Gothic buildings are a symbol of society, we can consider that it is also possible to read a Gothic building as we would read a book and ask what it is trying to tell us. If the Gothic books or films are a symbol of people’s fears, then we could ask if it is possible to look at the gothic building in the same way. The workmen who built the cathedrals would have been influenced by their society and this would be symbolised in the Gothic Structure. Ruskin argued that Gothic architecture is a symbol of moral decay because people’s values changed for the worse. Ruskin also said, that with this change, gothic buildings had more ugly features, this is known as the grotesque.

The word grotesque is often used to describe something that is considered to be ugly or unpleasant. The Grotesque can be seen in many Gothic and horror films, where there are terrifying characters and incidents. Despite the fact that these films might be frightening to watch, many people love them. The Grotesque isn't always ugly, unpleasant, or scary. People's fascination with horror and Gothic films shows that the Grotesque causes mixed emotions, such as attraction and repulsion, or sympathy and rejection at the same time.  The grotesque reveals a hidden truth about human nature or society. The grotesque is a symbol of something people don’t like to think or talk about, and this makes us feel uncomfortable when we look upon something that is grotesque.

The Grotesque is also something that Ruskin wrote about. He once again talks about the importance of the imagination and explained that the grotesque is a symbol that represents the truth. When thinking of the grotesque, Ruskin's books and ideas are useful because it helps us to look at the human imagination and its intention, and I feel that this we can use his ideas in art, film, or books.

Drawings and other works of art in the Sheffield Museums collection can help us understand Ruskin's ideas on the Grotesque. The artwork gives us a picture of what Ruskin had seen in person and then later wrote about. Frank Randal created the drawing of the The Visitation for John Ruskin's study of French architecture. It includes a small section above a Romanesque arch at the entry of the 'Notre-Dame-la-Grande-Poitiers,' a Roman Catholic cathedral built between 1200 and 1600 in the heart of France. Grotesque figures sit above a biblical scene at the front of the Cathedral and shows the meeting of the pregnant Virgin Mary and her cousin. 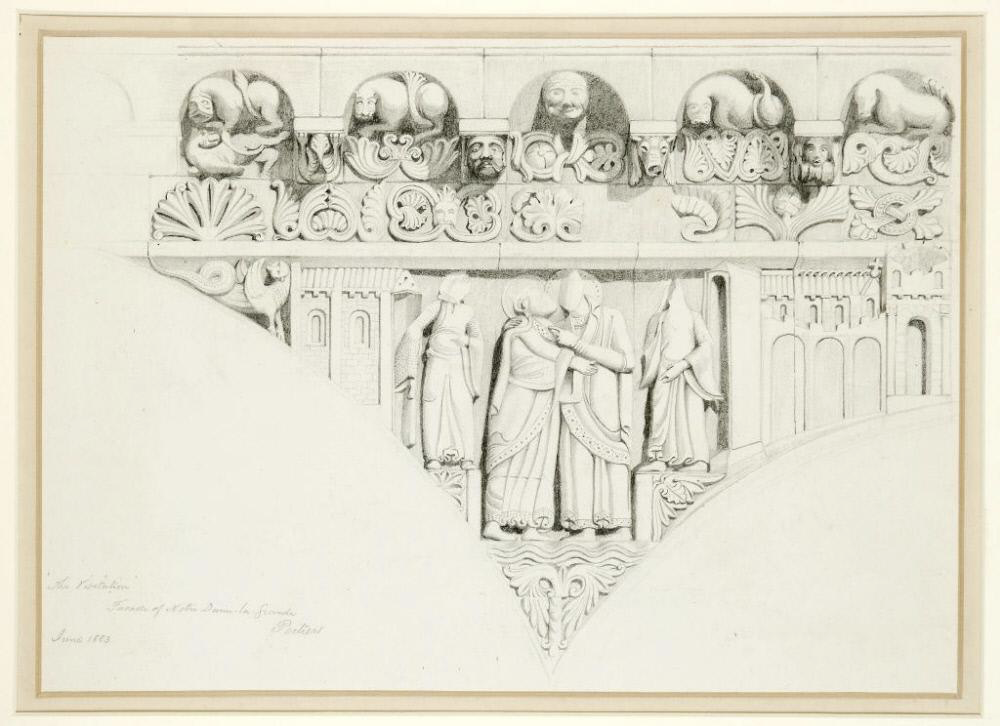 As already mentioned, the grotesque is a symbolic expression of what is hidden and not spoken about. The grotesque tells the truth about human nature and, like the Gothic, allows the imagination to run wild. As Ruskin stated in Stones of Venice, ‘nothing is more mysterious in the history of the modern mind, than the manner in which gross and ludicrous images are mingled with the work of the most solemn subjects in the work of the Middle Ages.’

Ruskin explained that the grotesque that we see in Gothic architecture is the result of workmen who could freely use their imagination. The workmen would have seen and been inspired by their surroundings. So, we can understand that the grotesque tells something about society at that time. The workmen had built grotesque sculptors of faces that sneered at those who looked at it. The grotesque faces comically looked down at the people with disapproval and terror. At the time the buildings were built, the rich people and aristocracy were selfishly only caring about having fun. This meant they did not take care to help those in society who needed help. Ruskin described how the ‘costly pleasure and self-indulgence’ had meant that society has become spoiled by the selfish actions of the rich, and this downfall of man is symbolised in grotesque architecture.