Fears surrounding the human effects on the climate have been a forefront issue in recent years especially amongst the younger generation with the rise of activist groups such as Extinction Rebellion and School Strike For Climate. They advocate for radical and rapid changes in the capitalist and consumerist lifestyle but most importantly for the world’s collective governments to tackle the crisis and to meet the commitments of Paris Climate Accord Agreement. When I started to explore the Revealing the Ruskin Project in May a connection between the climate crisis and a Victorian art critic was never expected, but  part of John Ruskin’s philosophy championed the need for a slower consumer culture and a symbiotic relationship with nature rather than a destructive one.

"But our cities, built in black air which, by its accumulated foulness, first renders all ornament invisible" John Ruskin, Our Cities, 1865 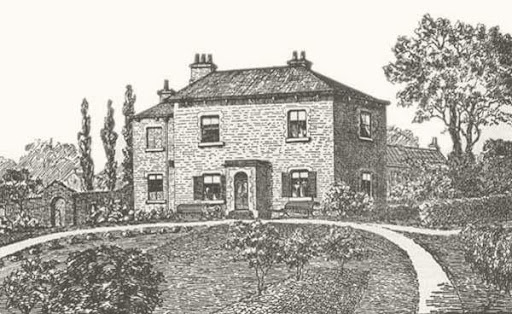 The industrial revolution which began the shift from countryside and cottage industries into the cities and industrial labour intensive factories, disturbed Ruskin as he believed that the shift into mass consumption was making life for the everyday workmen  and women less fulfilling. Numerous strikes and protests drew a greater awareness to poor working conditions and the dangers of factory life such the London Match Girls Strike of 1888. Feeling the effects of pollution within industrial cities due to their overbearing smog, Ruskin retreated into the countryside and established St George’s Company in 1871 (which became the Guild of St George in 1878), with the aim of creating an idyllic self-sufficient community. The Guild aimed to utilise the unspoiled natural landscape of the English countryside and the establishment of city cultural centres  such as museums to bring fruition to the lives of the workmen.

The Ruskin Collection contains numerous plates from John James Audubon’s book Birds of America, published between 1827-1838. This plate, which was printed by Robert Havel Junior in 1835, is of a Snowy Egret which Audubon observed during the winter in Florida. 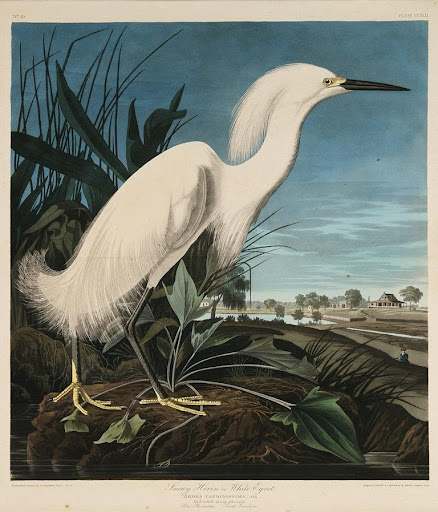 Audubon started documenting America’s birds as he was worried about the effects that large scale hunting was having on America’s bird populations due to the rise in the plume trade (the hunting of wild birds for their feathers) during the 19th century and saw his work as a conservation purpose.

Interestingly in differentiation to other ecologist at the time, Audubon chose to document the birds in their natural habitats rather than using taxidermy, which gave his figures a more lifelike appearance. The popularity of feather hats nearly wiped out North America’s Snowy Egret population; Audubon’s work inspired the establishment of the Audubon Society in 1886, dedicated to the protection of wild birds and their eggs, and fortunately the population has been able to recover.

However the fast fashion industry still plays a fundamental factor in the destruction of our environment today and in many cases has caused catastrophic effects to the earth’s habitats; for example the dried up Arial Sea basin (below) has been directly linked to the surrounding cotton production factories. 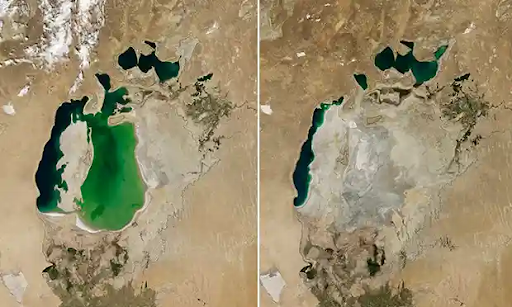 The Aral Sea in 2000 on the left and 2014 on the right. Photograph: Atlas Photo Archive/NASA

Leafage of the Venetian Capitals 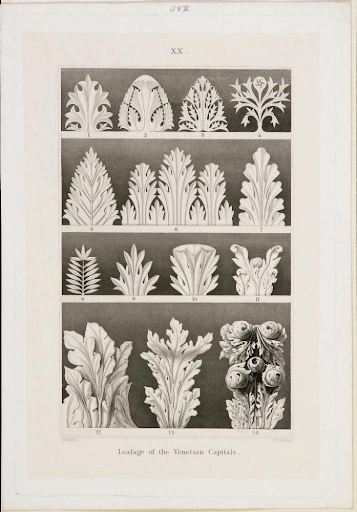 A large proportion of Ruskin’s career was spent in Venice studying and documenting its architecture and his main interest was in the decoration of the buildings. Ruskin’s philosophy on the nature of gothic is that the spirit of a society should be shown through their architecture and although a hierarchal structure will exist within a labour structure, in ‘gothic’, the personality of every individual workmen could be shown by giving them a decoration piece on the building.  The onset of the industrial revolution brought a demise to elements of craftsmanship and cottage industries that Ruskin admired, he tried to counteract this decline by the establishing the Guild of St George which advocated workshops and creativity.

'I have already enforced the allowing independent operation to the inferior workman simply as a duty to him and as ennobling the architecture.' John Ruskin, The Nature of Gothic, 1892

In many ways the effect that lockdown had on Britain’s high-streets has paved the way for a new influx of smaller sustainable businesses that promote a slower consumer culture and the craftsmanship that Ruskin advocated for. This has especially thrived within the younger generation with the rise of individual-led brands such as illustrators Eva Malley and Rosi Tooth that utilise social media such as Instagram and TikTok.

The Gates of the Hills

This piece, right, is a watercolour by Ruskin copying a section of William Turner’s painting of the ‘The Pass of St Gothard’ in Switzerland. Ruskin often used paintings and images of the natural and powerful landscape of Switzerland to to critique the destruction of the English landscape due to consumerism. The later part of Ruskin’s careers was centred on critiquing the effects of industrialisation and he went on to publish The Storm Cloud of the Nineteenth Century in 1884. During his research for this he counted the hours you could see the sun in central London due to the effects of smog and it was only 40 minutes of the day, this led him to declare the ‘storm cloud’ as a new meteorological phenomenon due to the effects of human activity.

However declaring Ruskin as a pioneering environmentalist could be an overstatement,  Ruskin as always is still a character of contradictions. The basis of his ecology was rooted within religious morality and he sometimes dismissed the need for scientific interrogation.  Furthermore, he was coming from a place of privilege.

On the other hand Ruskin did play a role in protecting the natural landscapes of England, for example in the 1870s during a controversy surrounding the construction of a water pipeline between rural Cumbria and Manchester. Ruskin, in collaboration with Hardwicke Rawnsley, opposed the damming of Lake Thirlmere. Furthermore his written prose, including Fors Clavigera published 1871-1884 and Unto this Last published in 1860, powerfully argue that capitalist and consumerist societies grossly mismanage resources. 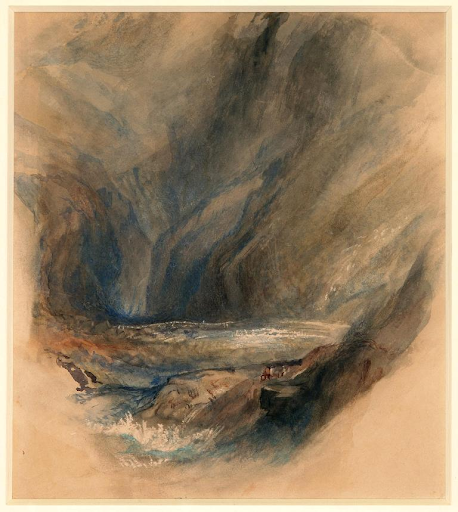 The Gates of the Hills', detail from 'The Pass of St Gothard', near Faido, Switzerland, after Turner, 1855. John Ruskin. CGSG00105