This piece was inspired by the reading of Ruskin’s work in Modern Painters, specifically the essay ‘Of Truth of Space’ where he speaks about how we see things at distances. I was further influenced by the stained-glass illustrations by Frank Randal, commissioned by Ruskin and available to view on the Sheffield Museums catalogue. When translating Randal’s, I was influenced by the art of the Modernist poet-artists David Jones, specifically his work In Parenthesis. Taking guidance from his featureless faces and dense verse, the piece aims to detail the movement of humans from the death of the muse to our own death, to finally the death of the future. 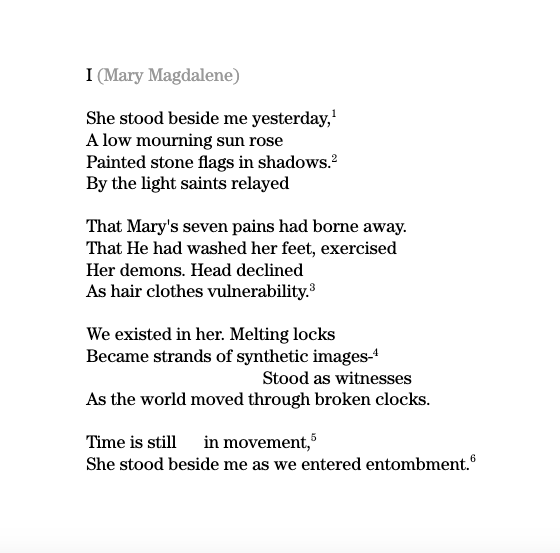 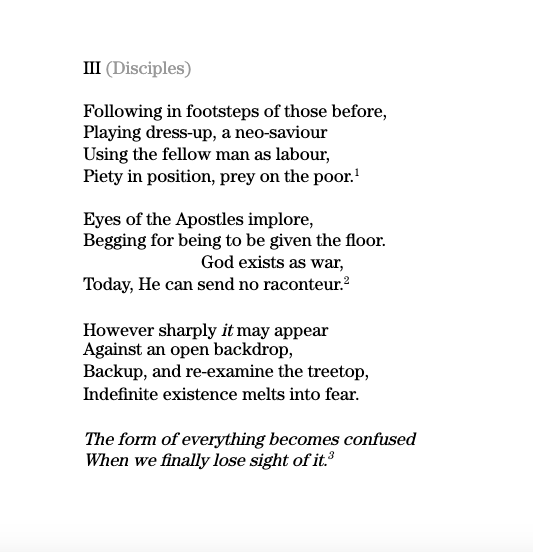 ‘Salvation in Three Movements’ is a poem concerned with the passage of time under capitalism, transforming the image ‘Study of Stained Glass, 'St Mary Magdalene and Jesus', Bourges Cathedral, France’ by Frank Randal (1852-1917) (below) into Linocut prints. The intention behind the art style was to imitate the style of David Jones (1895-1974), specifically the image prefacing his Modernist epic In Parenthesis called ‘Frontispiece’. His style is abstract, and features faces and bodies that are disconnected from a reality, presenting the trauma of war. In the modern trauma of hyper-capitalism, the development of which Ruskin aired his grievances, and the increasing digitisation of existence a sense of Being (that is the essence of existence) is lost, the figures depicted in the prints are expressionless to stress this sense of loss and disconnect from Being.

Taking from the modernists, the verse is dense and features a lot of references to Ruskin and beyond. At points directly quoting him. The verse was largely influenced by Ruskin and Jones and is concerned with a movement from past to present to future in detailing our relationship as a Spinozian extension of the world, meaning that the earth is the whole and as humans we are extensions of the earth, and how the muse; embodied in Mary Magdalene has died and we are slowly following, Jesus Christ being the present, and the Disciples being the future. 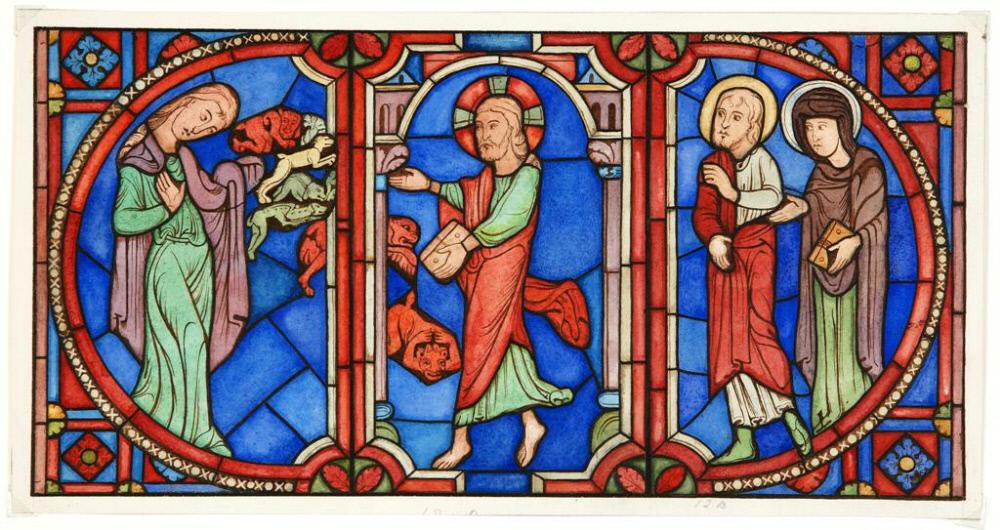 Part One concerns itself with the muse in the past tense, referring to the loss of the muse, which in the case of the wider poem is the Earth. Transforming the image of Mary Magdalene as subservient and previously a fallen woman, instead as a profoundly tragic figure.

She stood beside me as we entered entombment – La Roche died and thus she has become a memory, a memory of Being but also in a wider sense, same with Mary Magdalene, no longer a person but a symbol. They are both being used as symbols for the world as humans enter our self-embalming.

Part Two is in the present tense and deals with the sense of our current Being passing and any salvation, reason or even absence from our constant death is impossible. Any attempt at respite in suffering is lost. The image of Jesus as the Saviour is lost, his death is a memory that haunts modern existence.

Part Three is in the future tense and should be read as the marking of a future that is the totality of Neoliberal economics and Neo-Conservative moral and social rhetoric. Neo-Conservatives pine for a time that has never existed, instead expanding the claws of death that capitalism rakes in profits while creating a morality based on reactionary Christian values. This part of the poem seeks to criticise the future we are heading towards while also attempting to come to terms with the inevitability.