The Guild of St George was created by John Ruskin as a way to promote his political and environmental ideals. The Ruskin collection is very varied in what it contains but overall, it serves as a wonderful reminder of his key ideas, many of which are applicable to our modern world.

Conversations around what we want the future world to look like are being had right now, from work to hobbies to the natural world. Perhaps, while looking to the future, we should seek to consider the minds of the past. Here’s how Ruskin’s ideas, as represented by the collection, are relevant to our world. 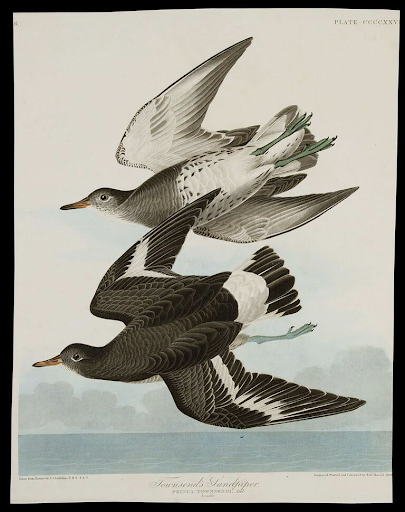 “… go to nature in all singleness of heart, and walk with her laboriously and trustingly, having no other thoughts but how best to penetrate her meaning…”

Many of his key ideas are extremely relevant to the modern world and to current popular political activism, especially regarding environmentalism which has seen a burst of enthusiasm particularly amongst young people. From activists like Greta Thunberg, to documentaries from David Attenborough, and even large political campaigns such as the ban on plastic straws, environmentalism is one of the most prominent political conversations being had right now.

Several items in the Ruskin collection represent aspects of nature, depicting all sorts of natural life. The Townsend’s Sandpiper (1838) by John James Audubon is a particularly interesting example.

The engraving is part of Birds of America by Audubon, an illustrated book created as a way of recording birds of America for conservationist use. Audubon had concerns about the impact of hunting on a large-scale. The construction of the book by Audubon combined real life studies of birds in their natural environment while also utilising birds which had been stuffed and artificially positioned to create the details in his work. The illustration is a beautifully detailed depiction of natural life and is part of a wider body of items in the collection observing elements of the natural world, emphasising the intricacies and beauty of nature in all forms, from plants to animals.

The inclusion of this item is indicative of Ruskin’s own interests in the natural world but also specifically representing his own conservationist ideas. Conservation efforts are a key part of the modern discourse around the environment, but Ruskin reminds us that these concerns are not new. John Ruskin had many environmental ideas such as conservationism and naturalism, and the work of the Guild of St George upheld these ideals. The “unimproved” (unspoilt) national nature reserve donated by Margaret E. Knight to the Guild in the 1930s is a good example of the commitment to these ideas. According to the Guild’s website, “Ruskin’s mission, and his Guild’s purpose, was to make Britain a better place to live in. He wanted everyone to see and enjoy the unspoiled, inspirational beauty of the world, both in nature and in art.” The art of the collection combined with the land managed by the Guild perfectly demonstrates this goal by showcasing the natural environment in art and the real world. 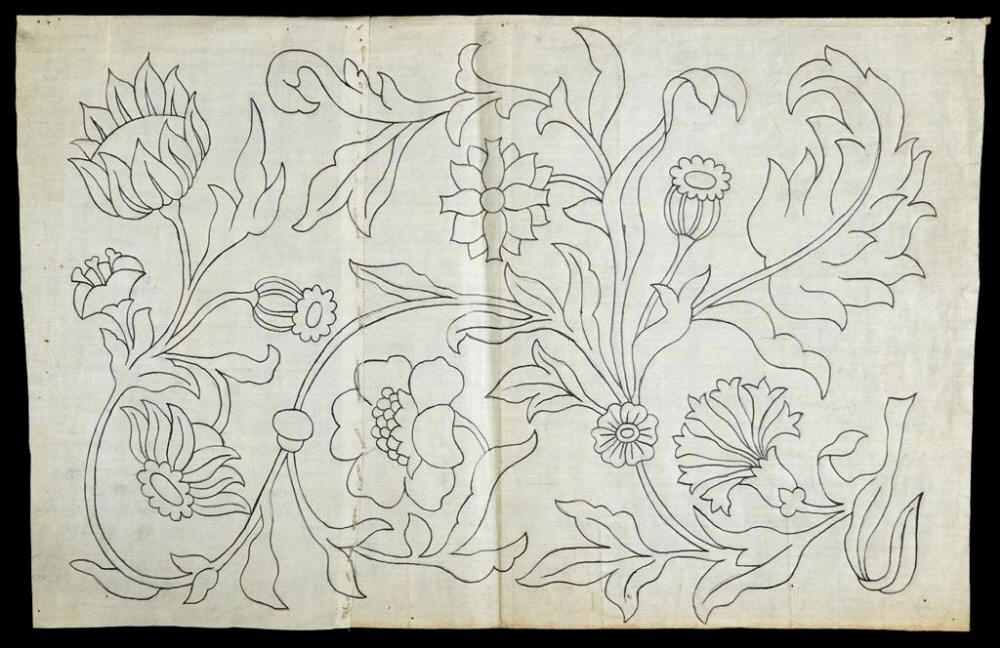 “Life without industry is guilt, and industry without art is brutality.”

It may seem odd to group work and art, but the collection was originally created for the working men of Sheffield and provided them access to art. Further, art and work are of course linked as demonstrated by many of the items in the collection demonstrating the beauty of architecture, the beauty of lace, the beauty of clothing patterns etc. Ruskin staunchly believed in the revival of arts and crafts, believing that work should be both profitable and creative. He argued that personal industry and creativity were key to personal happiness.

This floral textile pattern is a good illustration of the overlap between art and work. It is a Ruskin Linen Industry pattern, which was used to help embroider a design onto cloth. The pattern is a beautiful nature themed design, depicting flowers, stems and leaves in a swirling design.

The Linen Industry was set up by a trustee of the Guild, Albert Fleming, and his housekeeper, Marion Twelves, who shared similar beliefs to Ruskin about the issues of the commercial industry. Right now, conversations about work are taking place as people are re-evaluating the work-life balance. During Ruskin’s lifetime, work was changing too as the commercial industry was booming. Ruskin was a critic of the miserable working conditions of the commercial industry. He also had concerns environmentally relating to industry and the way in which it was sweeping up the countryside and industrialising the natural world. This is why he promoted the revival of the rural economy. Through the industry, they were able to forgo factories and instead allow the women working for them to work from home. 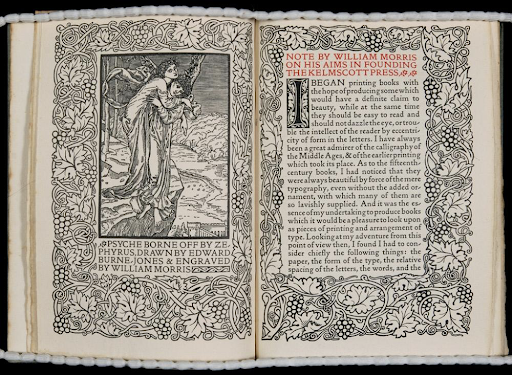 A museum is many things but it is always a source of education. The collection features architecture, art, botany, textiles etc. through the use of visuals, combining education and beautiful things. No piece in the collection better represents this than the book in which William Morris explains his aims in founding the Kelmscott Press.

Morris was known for many things in his lifetime and was an extremely influential figure, especially regarding politics where he was a keen socialist. In later life, he founded the Kelmscott Press which was intended to create books which were beautiful. The books produced are reminiscent of older book production styles, with swirling border patterns and typography. Yet these are combined with a simple, easy-to-read font. He appreciated beauty and art in the aesthetics of the books produced by his press. Morris considered that the mass-produced books of his time were ugly and badly made, which he saw as indicative of a wider issue with mass production. These ideas of beauty and craftsmanship are representative of Ruskin’s thoughts about the importance of arts and crafts, but it is also a wonderful representation of the aims of the museum.