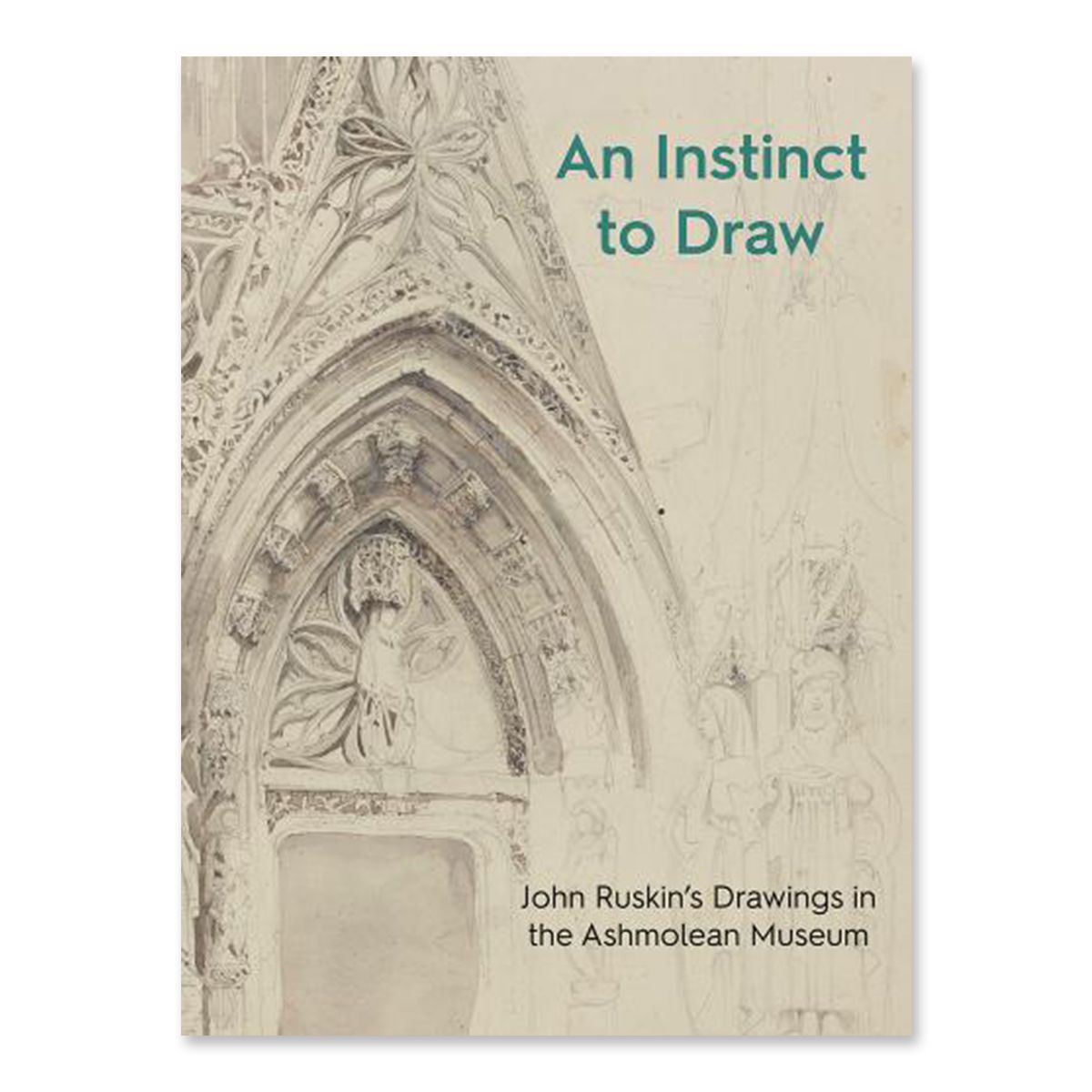 The book under review. The cover image is a detail of Ruskin’s drawing The Southern Porch of St Wulfram, Abbeville, 1848. Pencil and watercolour. 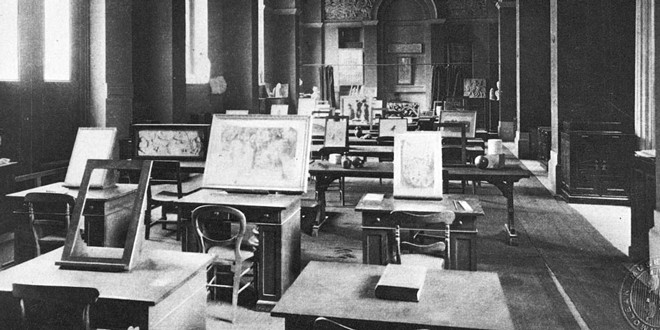 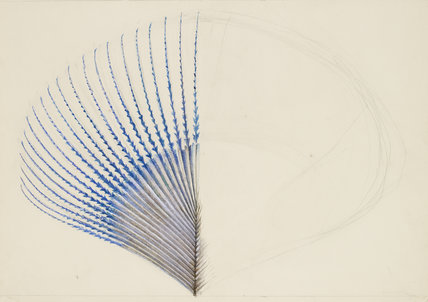 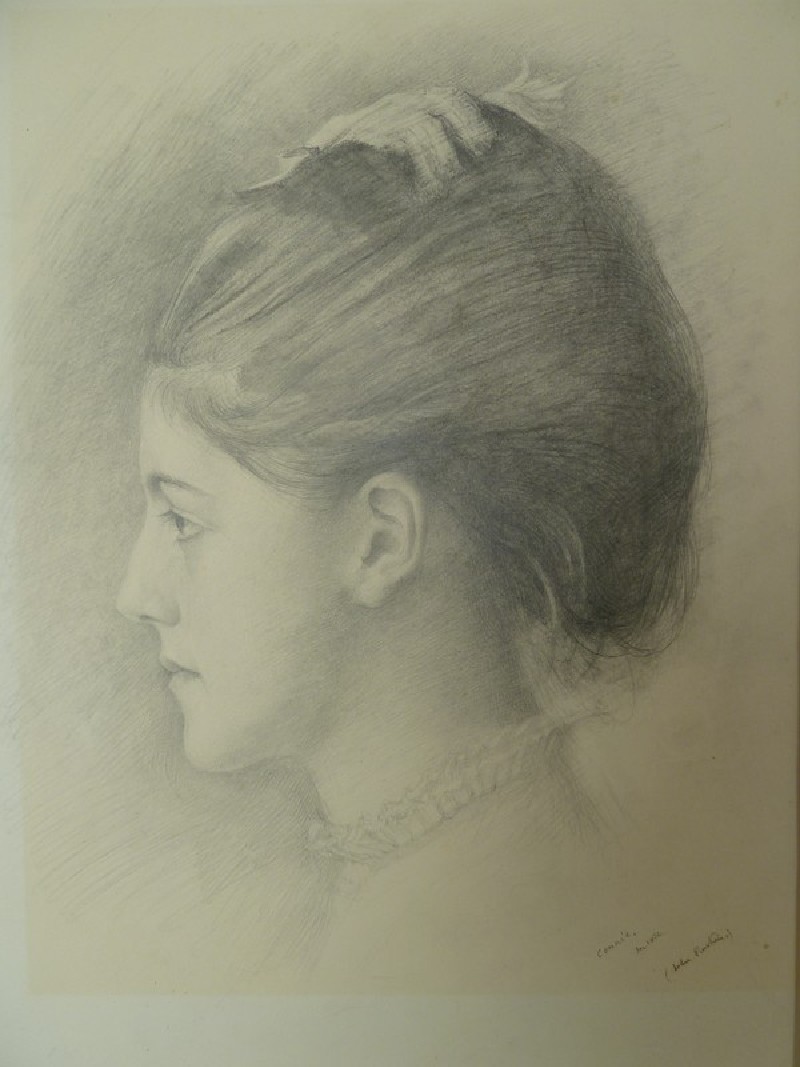 151 years ago – a year before launching what was to become the Guild of St George – Ruskin took up his appointment as the first Slade Professor of Fine Art at Oxford. The importance of this new role cannot be exaggerated. Art had never before been a subject for study at an English university and what Ruskin was to do with the role cannot have been obvious. All he was required to do was lecture, but what were the lectures to deal with and was anything to follow from them? I imagine he was expected to deal with the history of art, and he certainly fulfilled that expectation, but he was unwilling – even unable – to separate art from its subject matter in the world, or the history of art from the practice of it. His experience as a teacher was mainly as a drawing master and, consistent with the views expressed in his writings, he thought the first duty of art teachers was to help their pupils to see. Seeing meant primarily seeing nature, which Ruskin understood as seeing particular things, not through the lenses of custom and convention, but as they really are. There was nothing to be gained in teaching someone to draw if they could not see the object to be drawn; once their eyes were opened, however, the task of drawing would then help them to see that object better. This was not, moreover, a purely practical matter. Ruskin valued what he called ‘admiration’: the sense of wonder in the face of what is beautiful. ‘I would rather teach drawing that my pupils may learn to love Nature,’ he wrote, ‘than teach the looking at Nature that they may learn to draw.’ It followed that you could not truly appreciate the great masters – the Turners and Tintorettos – without recognition of their truthfulness and their feeling for what they saw.

Those who knew Ruskin cannot have been surprised that he interpreted his duties in this way. But I doubt if anyone anticipated that he would then go on – as he did in that first year – to found, at his own expense, a drawing school with a salaried Master, so that students of Classics or Mathematics could at no further cost to themselves learn to draw. The Ruskin School of Drawing is now exactly what he did not want it to be – the Ruskin School of Art, where art students study the things they study in art schools across the country – and the extraordinary collection of examples Ruskin assembled for the students, pedagogically organised into four series, is safely lodged in Oxford’s Ashmolean Museum, where it can be seen on application but, as far as I know, is never used for teaching.

Companion Stephen Wildman estimates that the examples I refer to amount to roughly 1,000 items, of which about 300 are drawings by Ruskin himself. It is worth reflecting on this simple fact. This is one of the two large collections of Ruskin drawings in the UK, the other being the Ruskin Whitehouse Collection at Lancaster University, which was until recently in Wildman’s care. It is, however, the only one planned, catalogued and designed by Ruskin himself, and many if not most of the drawings in it were made for inclusion in it. The collection therefore suggests a pleasing paradox. It is itself a work of art of some complexity, though the pictures in it were never meant to be art works, but a set of examples for use in day-to-day teaching.

In 1988 the Ashmolean published an excellent little book called Ruskin’s Drawings in the Ashmolean Museum by the distinguished art historian Nicholas Penny. It includes reproductions of some 30 drawings, most of them much more famous now than they were when the book was published. The Museum has now replaced this with something more like an exhibition catalogue compiled by Wildman. An Instinct to Draw: John Ruskin’s Drawings in the Ashmolean Museum, though modest in appearance, is for your desk or your coffee-table rather than your pocket. 85 drawings are reproduced, a little less than a third of the collection and almost all of them of the highest quality. The spectacular Kingfisher with dominant Reference to Colour – on Penny’s front cover – is on the back cover of this and most of the pictures which Penny selected are also included in it. There are one or two surprises, however. Not everyone will know the extraordinary abstract pattern Ruskin reveals in his Enlarged Drawing of the Extremity of a Kingfisher’s Wing Feather, which seems to have preceded his study of the bird as a whole and not, as one might have expected, grown out of it. There are also more conventional things of a kind one does not normally associate with Ruskin – the beautiful pencil portrait of Connie Hilliard, for instance, and a finished Swiss landscape, Evening in Autumn under the Castle of Habsburg.

Like a number of other Swiss views by Ruskin – none of them in this book – this picture has a historical and cultural dimension important in his thinking but not in many of his drawings. Ruskin is rarely a landscape painter in the way that his hero Turner is. His views are not populated and the accidental collisions of nature with society are mostly avoided. He praises Turner for accepting the litter in his streets and rivers but mostly eschews it himself. Instead, his forte is for the nature study, which may be elaborate (as in the kingfisher or various studies of mountains) but, increasingly when working for the Drawing School, is intensely particular and without context, often concerned only with tiny details – leaves, twigs, shells, stones and so on. Such drawings are abundant here and one would want to single out perhaps the Study of a Piece of Brick, to show Cleavage in Burnt Clay and An Exercise on the Colour of a Common Snail-Shell. Such concentrated attention seems to partake of the mystical, like Blake seeing a world in a grain of sand.

The selection of drawings is hardly to be flawed. As Wildman indicates in his introduction, every type of Ruskin drawing is represented. As well as the nature studies I have already mentioned, there are the expected flower drawings, a generous gathering of Alpine views and a set of wild creatures from the London Zoo and the Natural History Museum; there are architectural drawings, copies after favourite masters and three fine examples of letter-cutting. Some drawings are simple records of circumstance; others are rich with symbolic significance – though, indeed, almost anything that Ruskin touches seems to tremble on the edge of some larger meaning. There are rapid watercolours, capturing cloud formations or the changing colours of dawn, and there are slow and labour-intensive long-term studies, such as the copy after Bernardino Luini, which Ruskin worked on over a period of seven weeks.

Each drawing is accompanied by a description. These are without exception vivid and absorbing. Ruskin’s life and work are exceptionally well documented and Wildman, probably the most learned scholar of his drawings now alive, uses our wide knowledge to good effect. But he never writes to deter the ordinary layman, and every description is buttressed with anecdotes and quotations that make this book – already a delight to the eye – a delight to read.