A set of six stamps to mark the Guild's 150th anniversary. 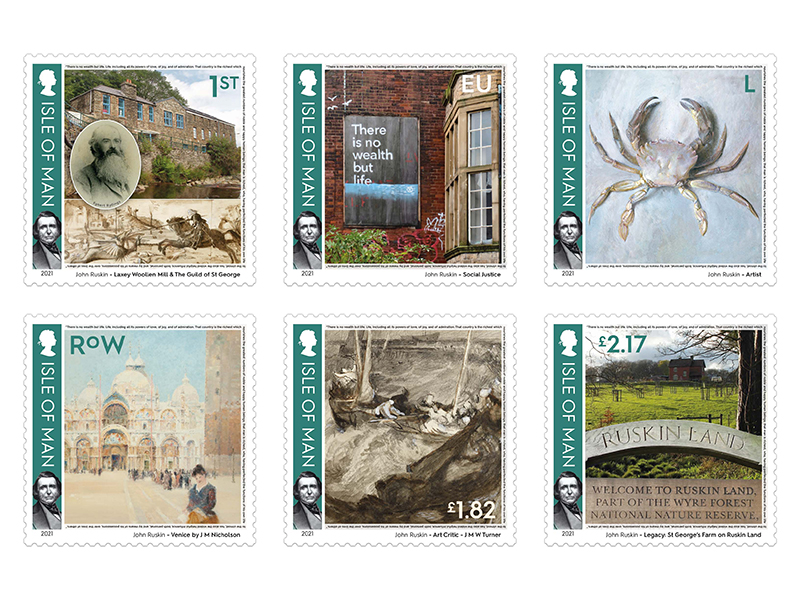 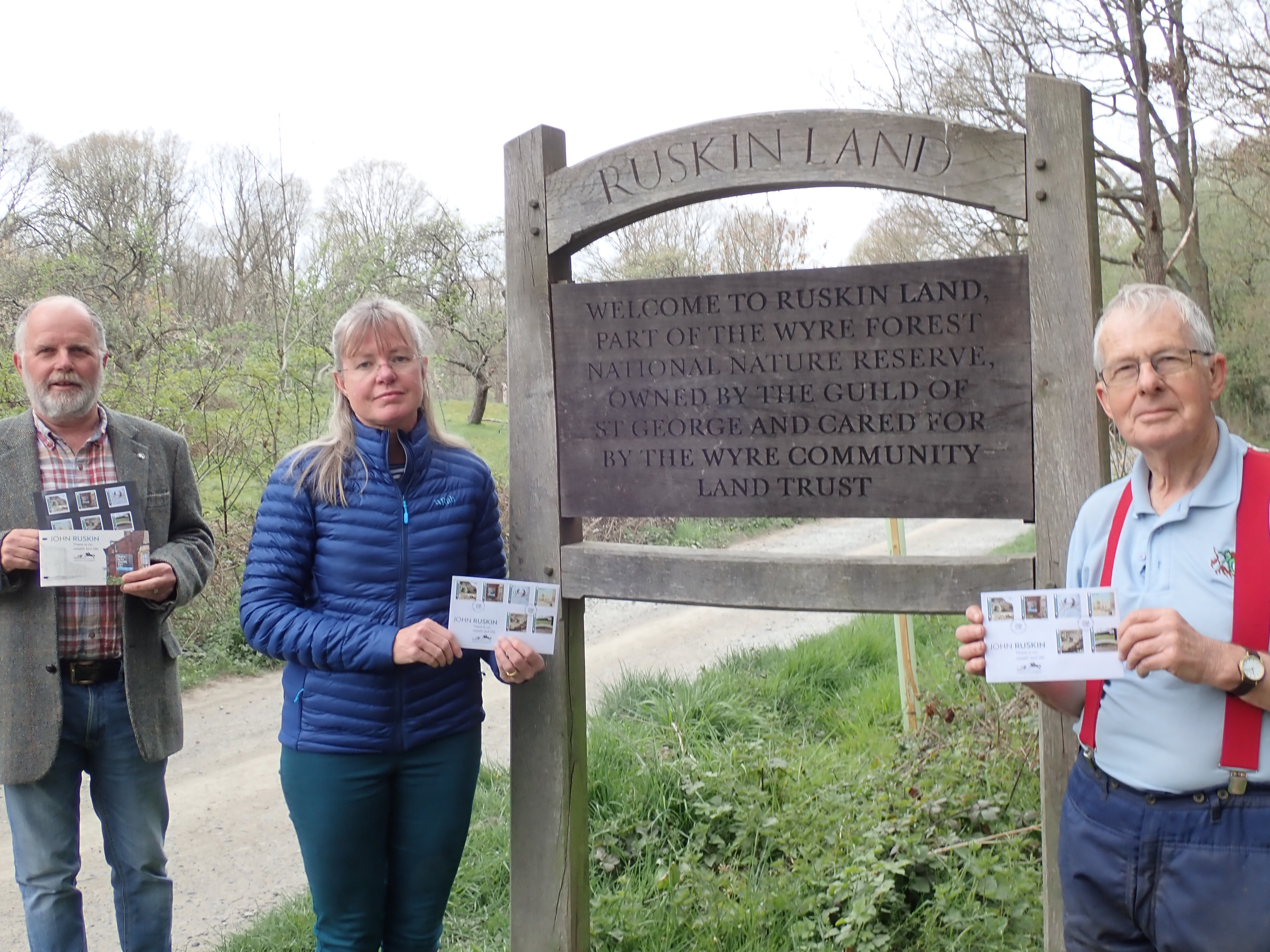 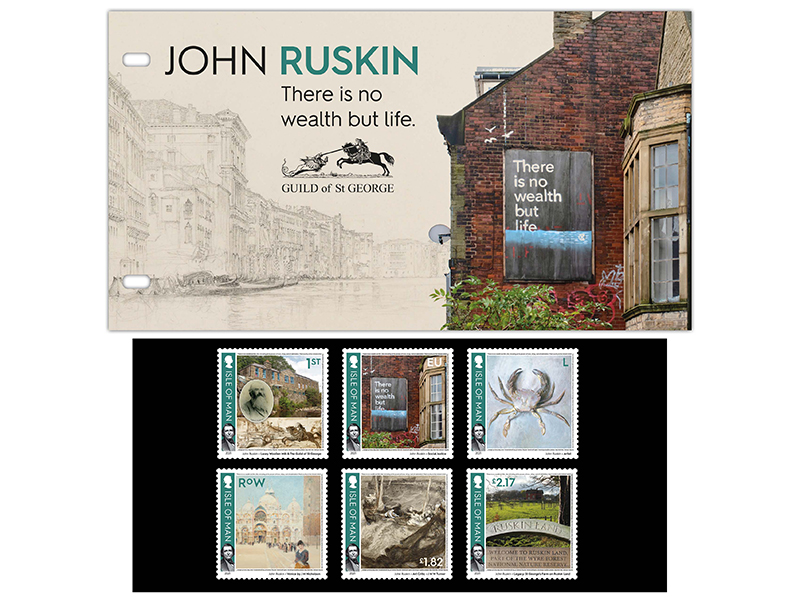 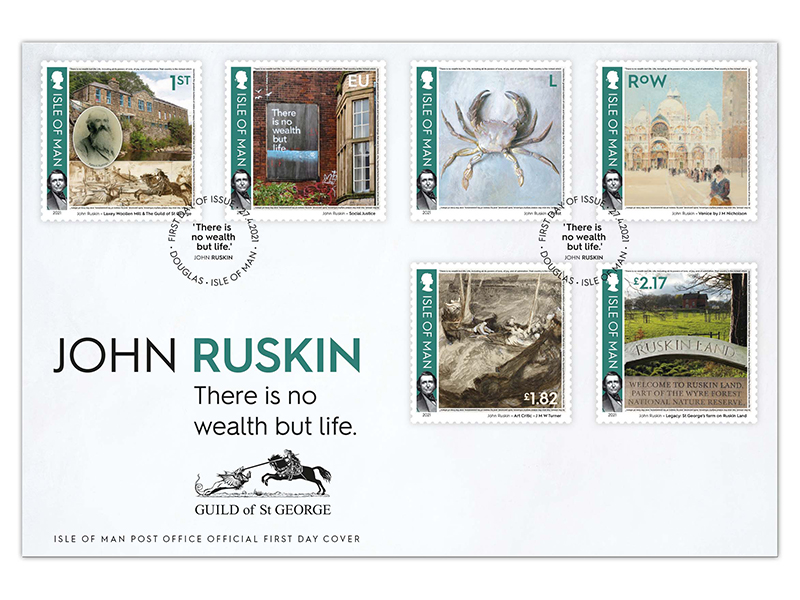 On the day of issue, Guild directors Jenny Robbins and John Iles were photographed (image above) with former Guild director and secretary Cedric Quayle, whose family come originally from the Isle of Man, with the first set of the stamps, standing by the oak welcome board at Ruskin Land, the Guild's land holding in the Wyre Forest, which itself features on one of the stamps. Full details of the stamps and how to purchase them can be found here.

What follows is the press release from the Isle of Man post office:

Isle of Man Post Office is pleased to issue this set of six stamps in celebration of the life and legacy of one of Victorian Britain’s most influential figures, John Ruskin. The Guild of St. George, set-up by Ruskin 150 years ago, played a pivotal role in the history of the Laxey Woollen Mills - a Manx institution that continues to practice traditional crafting methods to this day.

John Ruskin (1819 – 1900) was a writer, artist and philanthropist, and a fierce critic of prevailing social and political norms. He wrote about nature, art and architecture, craftsmanship, geology, botany, Greek myth and education—a dizzying variety of subjects. Driven by his deep faith in social justice, his concern for the impact of industrial society on people and their environment, and his passionate advocacy of a sustainable relationship between people, craft and nature, he established the Guild of St George in 1871 to right some of the social wrongs of the day and make England a happier and more beautiful place in which to live and work.

With the assistance of the Ashmolean Museum and the Guild of St. George, local designer Emma Cooke of EJC Design was able to create six compelling stamps narrating the story of John Ruskin’s life and the impact his actions and initiatives have had on countless lives and continue to do so to this day.

Declan McCarthy, Head of Publishing and Licensing Ashmolean Museum of Art and Archaeology University of Oxford said:” The Ashmolean Museum is thrilled to be partnered with Guild of St George to celebrate the genius of John Ruskin in this beautiful set of stamps from the Isle of Man Post Office. Ruskin was a true polymath and genius of his time, and it is warming to know that he continues to be celebrated more than 120 years after his passing. .” He continued: “This set of stamps marks the culmination of a number of months of collaboration with both the Isle of Man Post Office and the Guild. As Ruskin said: ‘Quality is never an accident; it is always the result of intelligent effort.”

Dr. Rachel Dickinson, Master of the Guild of St. George said “On behalf of Ruskin’s Guild and our 320+ Companions around the world, can I express our delight and appreciation for this beautiful acknowledgement of John Ruskin’s founding of the Guild 150 years ago, with the set of six stamps issued by the Isle of Man Post Office, in partnership with the Guild and the Ashmolean Museum.” She further added “In his lifetime, Ruskin’s ideas, values and his writing across a dazzling range of subjects had a colossal influence on public debate and thought in the 19th century. As an educational charity committed to making lives better through the lens of art, craft and the rural economy, we are delighted to celebrate the continued importance of Ruskin’s ideas in the 21st century.”

John Wood, Managing Director Laxey Woollen Mills, said: “John Ruskin, along with Egbert Rydings and the Guild of St.George were instrumental in setting up Laxey Woollen Mills in 1881, so we are absolutely delighted and honoured to be featured in this fabulous issue, celebrating the life of John Ruskin. One hundred and forty years later Laxey Woollen Mills is still here, continuing to stand by Ruskin principles, producing quality hand-woven cloth and garments on traditional pedal looms using locally grown Manx Loaghtan and other Manx wools. We think he would approve.”

Maxine Cannon, General Manager Isle of Man Stamps and Coins, said: 'We would like to thank the staff of the Ashmolean Museum for their assistance in the research and production of this issue, as well as expressing gratitude to the Guild of St George for their contribution. But our journey started much closer to home, the day we received he book 'A Weaver's Take: the Life and Times of the Laxey Woollen Industry 1860-2010' by local author Sue King. We are indebted to her for the wealth of research material within her book, and Manx National Heritage for the supply of images."