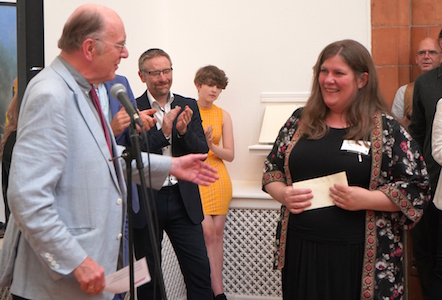 Juliette Losq receives her 1st prize from Master of the Guild Clive Wilmer. 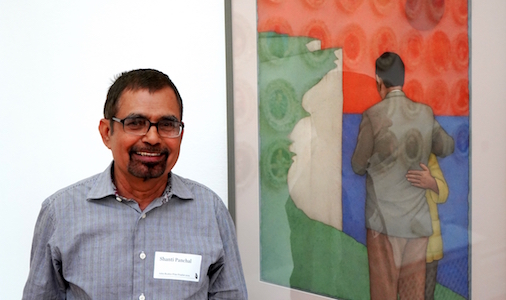 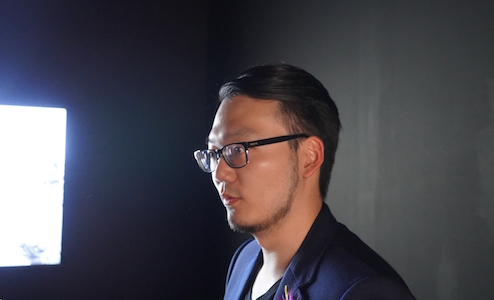 The 2019 John Ruskin Prize winners announced as all shortlisted artists go on exhibition in Manchester.

On Thursday 11 June 2019 at the preview of The 5th John Ruskin Prize shortlist exhibition; Agent of Change held at The Holden Gallery, Manchester School of Art, the prize organisers, visual literacy charity The Big Draw announced the three winners of The John Ruskin Prize 2019 where they were presented with their share of this year’s £5000 prize fund.

Following a challenging winner selection for the 2019 panel, artist Juliette Losq was selected by the panel as the 1st Prize Winner for her hand painted 3D installation ‘Proscenium’ - an immersive installation based on a ‘Teleorama’ optical device. Measuring an impressive 3 metres in height and width the intricately layered work defies belief as the restrictive boundaries of watercolour are boldly rejected. The 2019 selection panel were taken by the form and content of the work, the elegant brushwork at odds with the brutality of urban decay brought full circle as nature reclaims its rightful place.

Losq Comments:
“I share with John Ruskin an interest in both ruins and watercolour as a medium. My work focuses on marginal areas within cities and towns - those areas awaiting redevelopment, including post industrial remnants and waste ground. Unlike the ruins of previous eras these sites are considered unworthy of preservation. By recreating the experience of such locations on a large scale I aim to elevate their status and, in a sense, preserve them as havens from the progress of both time and industrial development.

By working on large scale and building up the complexity of the image I aim to challenge the notion  of watercolour as a sketching medium or one to deployed on a small scale. Like Ruskin I am interested in the intricacy of nature and using draughtsmanship and craft to explore this.

The John Ruskin Prize provided me with an opportunity to show my installation, Proscenium, to a  new audience in the prestigious and unique setting of the Holden Gallery and I am honoured that the work has been recognised by winning such a prestigious prize.

Awarded the 2nd Prize is painter Shanti Panchal for his powerful watercolour ‘Brexit. The prize panellists were struck by the artist’s control of the medium, simultaneously bold and affecting. On an issue (Brexit) where everyone has an opinion, this piece tells the story of the people who have made the UK their home and been unapologetically rejected by the nation. A place they believed to be an integral part of their identity.
On his piece ‘Brexit’ Panchal comments:

“Brexit has gone on for such a long time that it has now become so toxic. It has divided opinions  and touched almost every person one way or the other in this country. I was compelled to work on this intuitively and its only with the collective voice of the this country that we stand any hope of re-uniting a broken nation.

I am delighted to have been awarded this prize - especially this year as I was compelled by the theme: 'Agent of Change’ - most appropriate in this rapidly changing world which will have a huge impact on every one of us.”

The Student Prize winner Chao Wang’s memorising digital video ‘Walk with Me’ is an exquisite display of the poetic potential of digital art. The work alludes to a post-apocalyptic world, void of colour and navigated by the viewer as if taking a relaxing stroll in the countryside. It warns of a world, where nature is a distant memory, the calmness of the stroller in this world of tar at odds with the viewer’s fear of such a place.

“Its such an honour to win this award, especially as in my home country being an artist is an impossibility. Being part of The John Ruskin Prize exhibition ‘Agent of Change’ and winning this incredible accolade is an honour – this is a show that criticises power, the impact of human action and the devastating consequences of human inaction”.

The shortlist and exhibition:
In response to a nationwide call for artists, designers and makers, The John Ruskin Prize 2019 saw a record number of entries. Responding to this year’s prize theme: Agent of Change, 41 artists and designers, working across a broad range of disciplines, were selected from over 1260 entries for The John Ruskin Prize 2019. The 2019 selection panel considered over 3000 artworks by artists at all stages of their careers.

The shortlist exhibition ‘Agent of Change’ is curated by: Rachel Price and Zoe Watson

On this year’s exhibition the Prize’s Managing-Director, Rachel Price comments:

“ With the values of the radical Victorian polymath and social reformer John Ruskin at its core, and with his legacy in the spotlight in the bicentenary year of his birth, we are proud that the often challenging themes explored through The John Ruskin Prize resonate so strongly with contemporary artists and designers across the nation.

The overwhelming response to this year’s theme ‘Agent of Change’ highlights the active role of artists as perception shifters and catalysts of positive change in our society. The selected artists’ concerns are as diverse as their material approaches with works that are teeming with passion, dedication and wit. As Ruskin did some 150 years ago, the selected artists shed new light and innovative perspectives on societal, political and environmental issues - the collective voice from the 2019 shortlist is a refreshing antidote to apathy - with a stark and sometimes satirical reminder that sitting on the fence never changed a thing”.

As John Ruskin once said:

For this year’s shortlist the theme: ‘Agent of Change’ is explored through painstaking projects, in depth research, tongue in cheek criticisms, and unapologetic protest. The shortlist have created a collective sense of urgency as capitalism, consumer culture, toxic debt, climate change, class and cultural divides; issues both global and closer to home are top of the agenda.

The Prize
The John Ruskin Prize is now in its 5th year and in a nationwide call invited entries from established and emerging artists and designers aged 18 or over living, working or studying in the United Kingdom. The Award is £5000 with £3000 going to the Winner, and £1000 going to both the Second Prize winner and Student Prize Winners.

The shortlist exhibition, Agent of Change, is on display at The Holden Gallery, Manchester until 24th August 2019. The exhibition is free and open to all.