Companion & Guild Director Peter Burman visits the site where, in the summer of 1853, John Ruskin had stood to be sketched and painted by his protégé John Everett Millais, for the portrait now in the Ashmolean Museum. 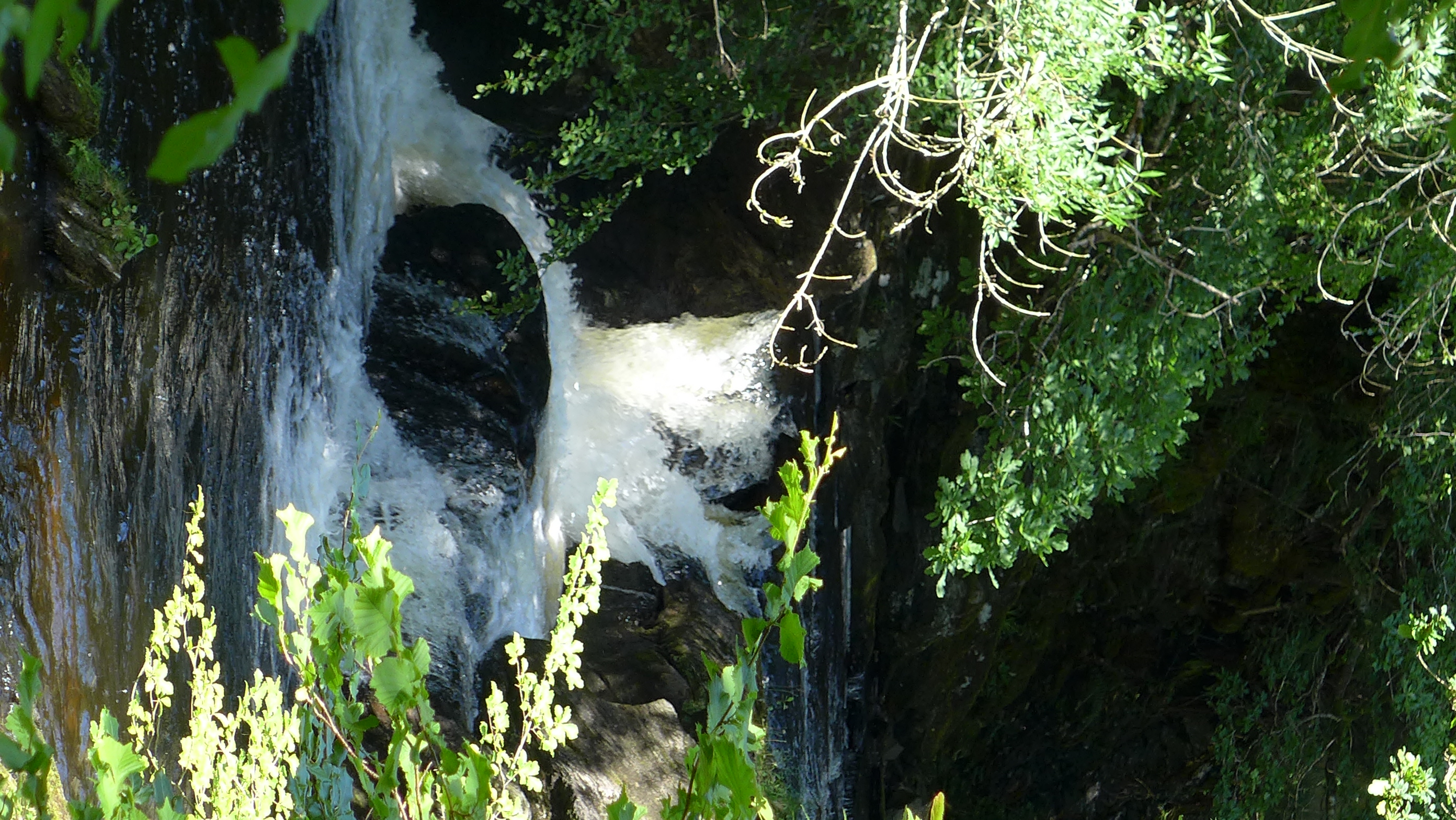 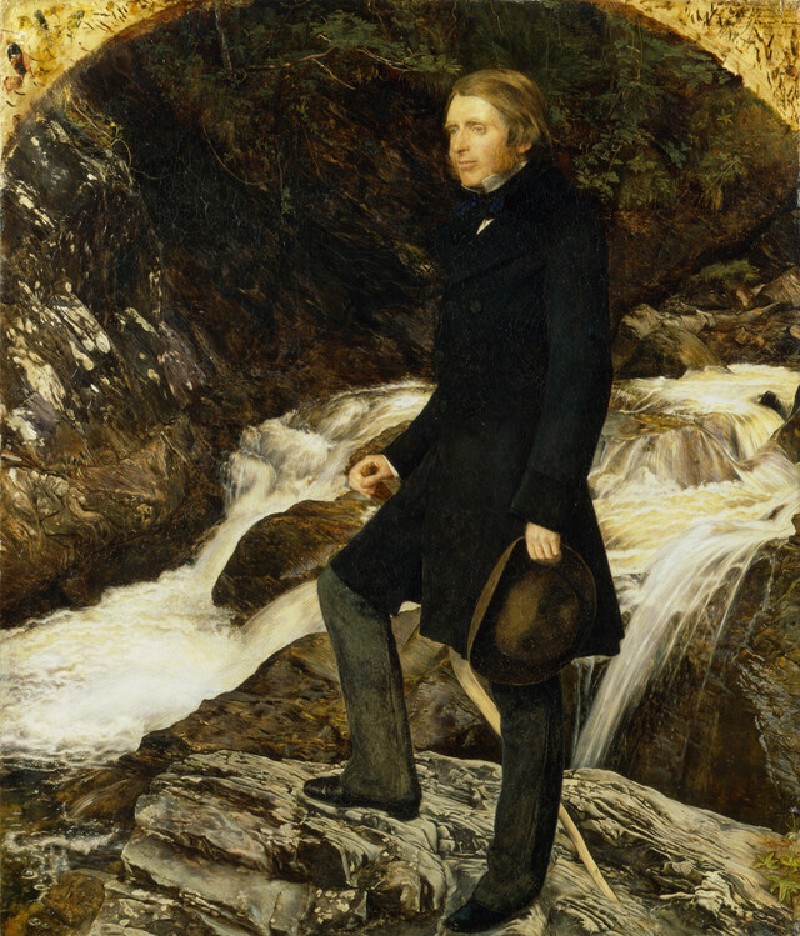 On Saturday 18 July 2021, on a golden summer’s day, Ross Burgess and I decided to do something we had been proposing for some time but had up to then been prevented by the Covid situation and bad weather. We wanted to see the site where in the high summer of 1853 Ruskin had stood to be sketched and painted by his protégé John Everett Millais (1829-1896). Ruskin was ten years older than Millais and in mid-1853 the fame which had come to him through the multi-volume Modern Painters had been consolidated by the publication of volumes two and three of Stones of Venice. Millais became the leading figure of the Pre-Raphaelite Movement, of which Ruskin had become the articulate advocate and defender.

The Trossachs is an extensive area of wooded glens, braes and lochs in central Scotland, lying to the north of Stirling, within easy reach of Glasgow and to a lesser extent of Edinburgh. We set out from our home in the middle of Fife, at Falkland, the journey itself worth the effort. Whenever we have occasion to go in that direction we relish the drive through beautiful Glen Eagles, taking us into south and west Perthshire and to such favourite places as the 17th century Library at Innerpeffray and the ravishing formal gardens of Drummond Castle and its woodlands beyond. A short stretch along the fast-flowing A9 in the direction of Stirling brought us past Dunblane, also of Ruskin-related interest as he had vehemently opposed the restoration of the cathedral under the supremely competent architect Arts & Crafts architect Robert Rowand Anderson (1834-1921).

From Dunblane we turned north towards first Doune and then Callander, historically in Perthshire but now in the local government area of Stirling. At Doune I was keen to show Ross something of Doune Castle, currently the subject of a major restoration and therefore not open to visitors. However, the staff on duty warmly invited us to take the circumambulatory path which provides spectacular views of the outside of the castle and for a stretch runs along the bank of the river Teith, a classic Scottish river, broad, sparkling and shallow and probably ideal territory for salmon. Suitably refreshed, we went on to Callander, also on the river Teith, a historic town of just over 3,000 inhabitants notable for being one long street with few outliers. We noticed a promising-looking second-hand bookshop but parking was then impossible. Later on, however, and past 5.30 p.m. we noticed that the bookshop was still open, parking was then possible, and we achieved some notable purchases. We also noticed a hotel with an intriguing appellation, Roman Camp Hotel, which must hint at a story.

Beyond Callander we headed west in the direction of Loch Katrine until we came to our goal, the village of Brig o’ Turk. Just before Brig o’ Turk we noticed a sign with the name of the Woodland Trust on it and later learned that the Glen Finglas Estate had been acquired by the Woodland Trust in 1996;[i] the Trust is doing great work in promoting responsible forestry, encouraging visitors to learn more about trees, and providing modest but appreciated visitor facilities so that no-one able to read their interpretation panels can be unaware of the connexions with John Ruskin and John Everett Millais, with the Glasgow Boys (a group of around twenty-five artists who were from or who had studied at Glasgow) or with Sir Walter Scott and his great poem The Lady of the Lake first published in 1810 and one of the great publishing success stories of the early 19th century. We recalled that Ruskin was also a passionate admirer of the novels of Scott.

In Glen Finglas Ruskin’s wife Euphemia (‘Effie’) Grey and Millais had fallen in love with one another. This led to the Ruskins’ marriage being dissolved on the grounds of non-consummation. In 1855 Effie and Millais were married; they had a long and happy marriage and produced eight children.

It was curious to be in that steep-sided glen and to think of all the emotions and events which had been stirred there by the presence of Ruskin, Effie and Millais. No doubt similar passions were aroused in the 1890s and onwards when members of the Glasgow Boys, not all of whom were boys, came here for holidays, to socialise and to paint.

[i] Since taking over the Glen Finglas Estate the Woodland Trust has been re-establishing native woodland species. Around nearby Loch Katrine, Scottish Water and Forestry Commission Scotland are also encouraging native woodlands. Between them the three organisations aim to create a woodland corridor from Loch Venachar to Loch Lomond that will further boost the area’s rich biodiversity of animals, including birds, and plants. 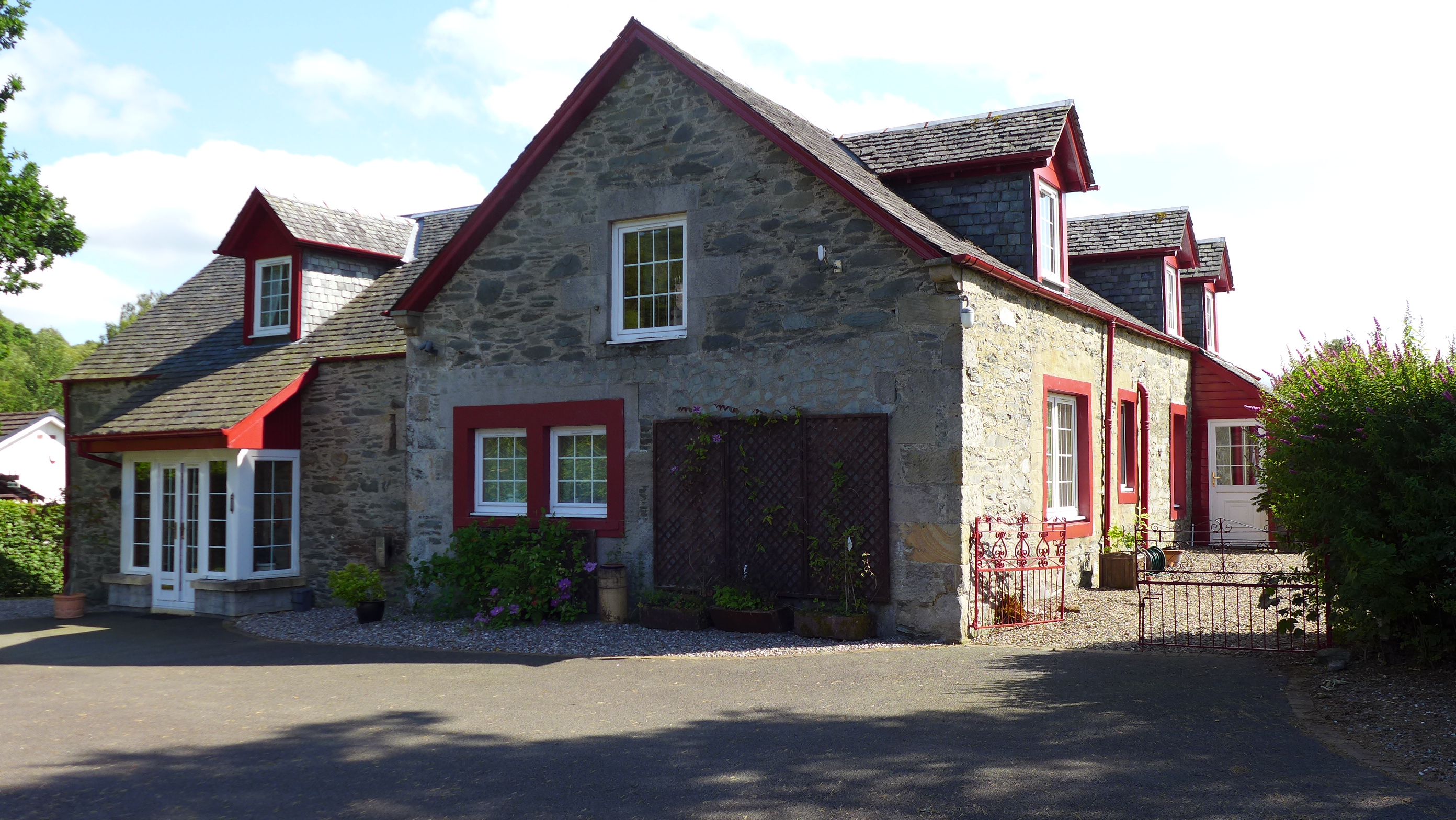 The former hotel where the stay of Ruskin and his party began.

On the main road we noticed on arriving in the village a house larger than the 19th century cottages in the upper part of the village and the name ‘Burnt Inn’ on its gate. The house appeared early Victorian, charming, and will probably have been the New Trossachs Hotel where Millais and his younger brother, William stayed, while the Ruskins stayed at the schoolteacher’s cottage. Afterwards Millais moved into the cottage, while William stayed on at the inn and continued his fishing. Later we found another cottage, formerly a cow-byre, and now the Byre Inn – the sort of simple cottage that there would probably have been more of in the mid-1850s, and all of them no doubt with thatched roofs of one kind or another.

What drew Ruskin, his wife and Pre-Raphaelite friends to spend the months from July to September here in 1853? First and foremost it was the dramatic surrounding landscapes, a quiet and beautiful place where Ruskin could carry on drafting his Edinburgh lectures, to be given in November, where Millais could paint and where Effie could – do what, precisely? Enjoy a quiet rural existence as a break from the hectic lives she and Ruskin had been leading in Venice and then London. Surely it was also the associations with Scottish literary history, especially Sir Walter Scott, with Rob Roy and other local heroes of the past that brought them here. In addition, Ruskin wished to continue to encourage Millais’s career as an artist and the idea evolved that that he would paint a very special kind of portrait of Ruskin showing him in intimate relationship with the spectacular cascading torrents of the river which flows down the steep valley of Glen Finglas. Ruskin wrote to his father:

‘Millais has fixed on his place – a lovely piece of worn rock, with foaming water, and weeds, and moss, and a noble overhanging bank of dark crag – and I am to be standing looking quietly down the stream – just the sort of thing I used to do for hours together – he is very happy at the idea of doing it and I think you will be proud of the picture – and we shall have the two most wonderful torrents in the world, Turner’s St Gothard – and Millais’s Glenfinglas. He is going to take the utmost possible pains with it – and says he can paint rocks and water better than anything else – I am sure the foam of the torrent will be something quite new in art.’ John Ruskin, Works, Vol 12, p.xxiv.

Today the painting hangs in the Ashmolean Museum in Oxford, where we have both seen it on many occasions. It is one of the greatest of the Pre-Raphaelite portraits and a jewel of the collection.

Arriving at the centre of the small scattered village of Brig o’ Turk we noticed a smart new Village Hall, the kind of facility which rural communities dream of. Opposite it was something that we were dreaming of on that hot summer’s day, housed in what had probably been the predecessor to the Village Hall, a Tea Room. This charming building of just over a hundred years old (used as a location in several films) has been taken in hand, superbly restored and refitted, by a delightful, enthusiastic and welcoming couple, James and Kay Hill. They proved to be knowledgeable and enthusiastic about the Ruskin connexion and produced for us a light but delicious late lunch. We were able to eat outside, but so much enjoyed their successful revival of the wood-panelled interior, which will make a visit pleasurable at any time of year.

After that necessary refreshment we made our way up the steep village street, off the main road, passing several attractive vernacular cottages and pleased to see interpretive panels at various stages in our journey. 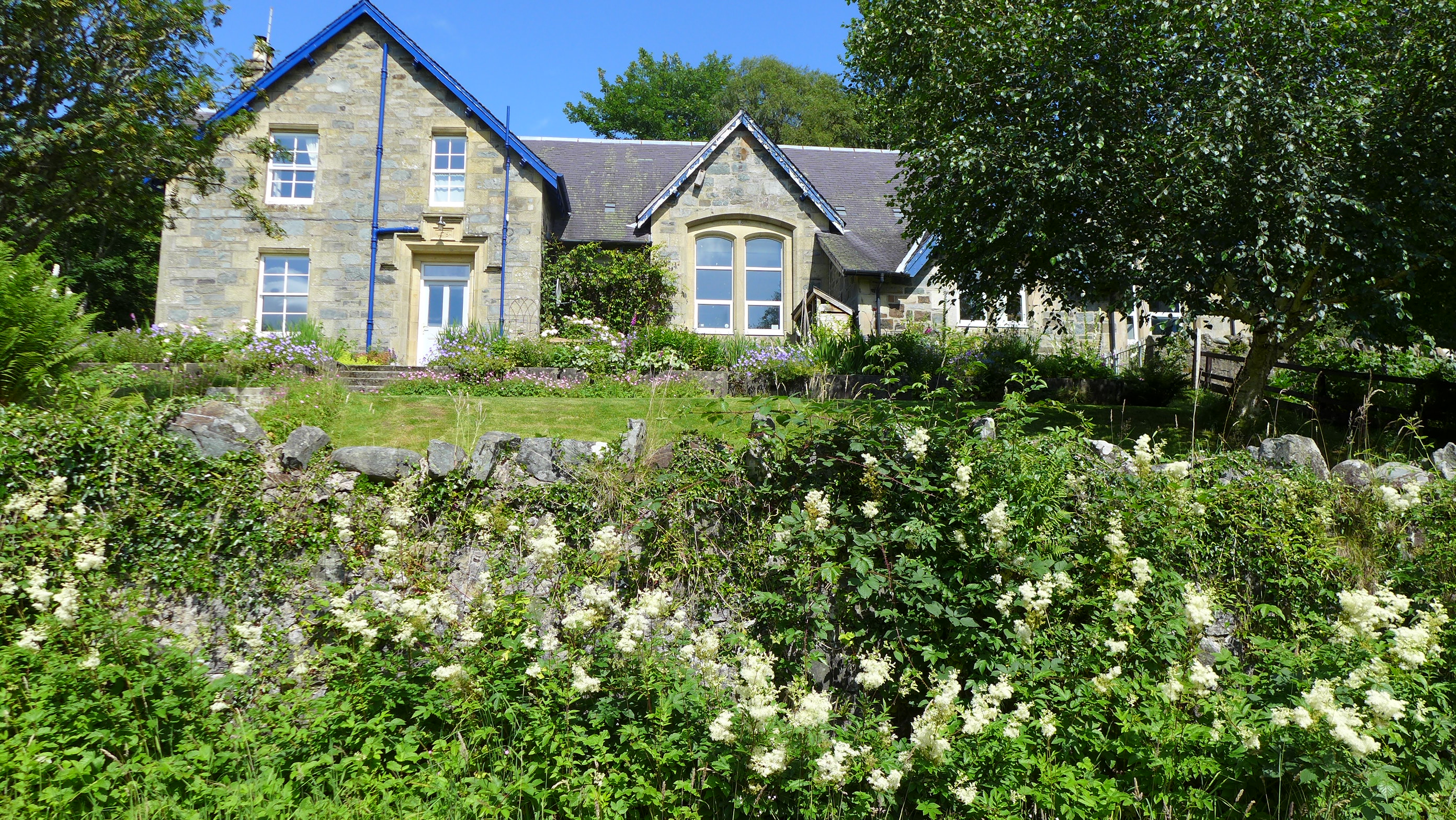 The School and Schoolhouse of 1875 are understood to be on the site of the cottage where members of the party stayed.

We passed the Trossachs School and School House with a richly planted ‘cottage garden’, the date of ‘1875’ prominently carved on the front of the School House. It is thought to occupy the site of the school-teacher’s cottage where Ruskin and his wife had stayed in 1853. It is no longer used for its original purpose, which seems a great pity, but no doubt there is good reason for it. It is clearly cherished as someone’s home.

Eventually we came to the Woodland Trust’s Forest Gateway and from that point walked the final steep haul to a small parking area at one side of which the river flowed at the bottom of a precipitous wooded slope. All that then captured our attention was sheer enchantment. Along the way of our upward ascent we had been delighted by the numerous ferns – Ruskin loved ferns – and foxgloves, a delightful combination. Now we looked down into the gully and saw rock pools, cascading torrents and – yes – looking towards the right we could see the distinctive rock formation where Ruskin had stood for the initial studies for the portrait. There is a central rock dividing the tumbling waters to go either left or right. The sound of the waters crashing on the rocks reminded me of the deep pedal notes of a mighty organ, such as the one we had heard in York Minster only a month before.

At last, we had seen with our own eyes the place – the very place – associated with that superbly confident portrait of John Ruskin about which so much has been written. It was a moment to cherish, difficult to draw ourselves away from, and we came away exhilarated, full of delight and empathy with the landscape, and glad that such a remote part of the Scottish Highlands carries such powerful messages and that the pressures of twenty-first century tourism have dealt with it lightly. It is available to everyone who has but the energy to walk up the steep path to a scene and sound of such timeless beauty.

Every convinced disciple of John Ruskin should make such a visit in a spirit of pilgrimage at least once in their lifetime. 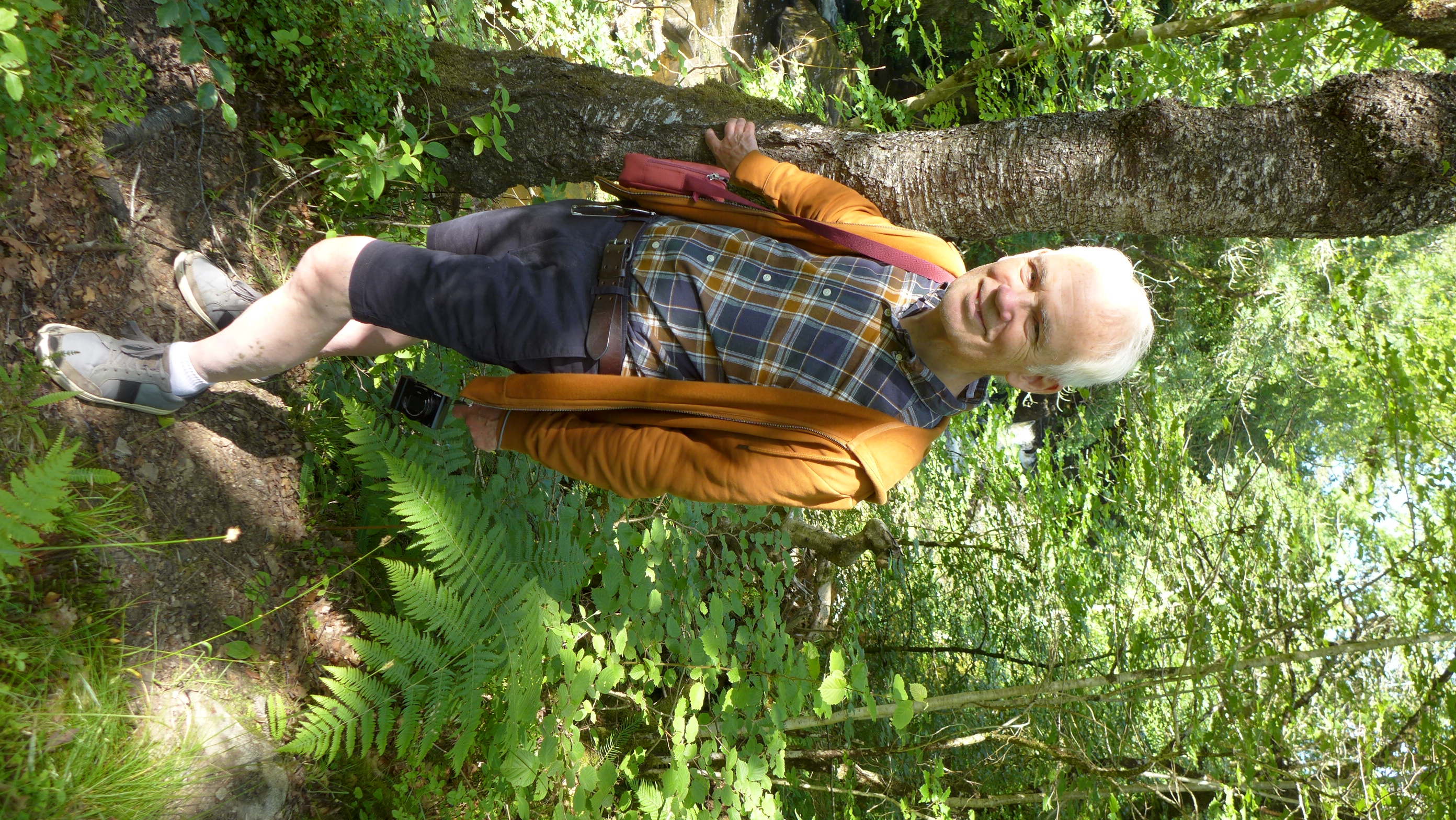 Companion Ross Burgess at the top of the steep drop leading to the spot.