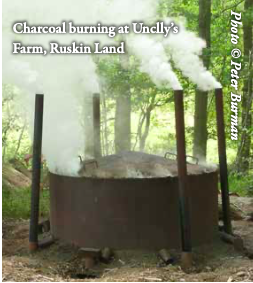 Few people realise that Ruskin was a passionate gardener and that the wise stewardship of land was one of his key insights into the nature of satisfying work and healthy food. I’d like to show how Ruskin sought to support rural crafts and reposition craftsmanship away from the manufactories back into his vision of an arcadian idyll.

Ruskin’s 1875 Memorandum on establishing the Guild of St George declared it to be ‘constituted with the object of determining and instituting in practice the wholesome laws of agricultural life and economy and of instructing the agricultural labourer in the science art and literature of good husbandry.’

In 1877 Ruskin purchased St George’s Farm, Totley, near Sheffield comprising an 18th century farmhouse, subsidiary buildings and 13 acres. He appointed Henry Swan, a ‘cycling vegetarian, Quaker and artist’ to help set up the farm as a collective, with nine working-men and their families. Like Edward Carpenter and his partner George Merrill they proposed to make boots and shoes to boost their income and demonstrate practical craftsmanship. It was one of Britain’s earliest communes, but lasted only two years. Edward Carpenter said of the farming community that ‘they were mostly great talkers.’ Finding the precise balance between ‘talk’ and ‘do’ has always been a challenge to idealistic communities.

Ruskin’s love of landscape was interwoven with his empathy for rural crafts and craftsmanship. Based at Brantwood, overlooking Lake Coniston, he vigorously encouraged local craft traditions – for example, textiles (‘Ruskin Lace’); furniture, enriched with carving; pottery (‘Ruskin Pottery’); traditional building materials and skills. The Guild today is an education charity focused on arts, crafts and rural economy. This focus is best exemplified at Ruskin Land, the Guild’s property in Wyre Forest, near Bewdley in Worcestershire.

The original property was given to the Guild by George Baker, Quaker, Mayor of Birmingham. Ruskin stayed wrote in Letter 80 of Fors Clavigera, 16 July 1877, that ‘he has shown me St George’s land, his gift, in the midst of a sweet space of English hill and dale and orchard, yet unhurt by hand of man.’ The original 20 acres were later added to by purchase by the Guild and are surrounded by 6,000 acres of oak forest, orchard, meadow and wildlife habitats.

On my first visit to Ruskin Land, in the summer of 2011, I was bowled over by the beauty of the place – ancient forest land, orchards, meadows, grazing land – and by the demonstrations of rural craftsmanship and sound husbandry. The Guild’s own 40 hectares of woodlands are managed in hand after a long period of being leased to Natural England. Obvious care has been taken in the replanting of the orchards, keeping old local varieties where they still had life in them and did not need to be replaced.

My architectural historian’s eye was caught by the two groups of farmhouses and their outbuildings. The Guild aspires to manage them with tenderness using traditional skills: as I write, a relationship is
being forged with historic buildings architect Robert Kilgour, former SPAB Scholar and Hereford Cathedral architect, who has his office in Bewdley. The Studio at Ruskin Land, now just over a decade old, shows how a barn can be sensitively developed using traditional skills.

On each of my visits I have been struck by the welcoming and friendly atmosphere created by John and Linda Iles, both of them Companions of the Guild, and tenants at Unclly’s Farm. They have worked to transform Ruskin Land, reinterpreting its mission, as expressed by Ruskin in Letter 5 of Fors Clavigera, May 1871:

‘We will try to take some small piece of English ground, beautiful, peaceful and fruitful. We will have no steam-engines on it, and no rail- roads ... we will have plenty of flowers and vegetables in our gardens, plenty of corn and grass in our fields ... We will have some music and poetry; the children shall learn to dance to it and sing it ... We will have some art, moreover; we will at least try if, like the Greeks, we can’t make some pots.’

The other farmhouse on the Guild’s estate is St George’s Farm, occupied by a young couple and their family, enthusiastically working with the ‘genius of the place’ in its forest context. In 2007 John Isles and Jenny Robbins, both Directors of the Guild, were instrumental in setting up the Wyre Community Land Trust (WCLT) to carry out forestry and agricultural work – in particular orchards and meadows - to a high standard of competence.

Community, volunteer and educational work have all been greatly expanded. The WCLT, now led by an enthusiastic team under Margaret Tunstall, offers conservation and sustainable woodland management to other landowners in and around Wyre Forest, clearly meeting a local need. A woodworking shop has been established to make saleable products; a timber drying shed, a sawmill and a sawmill shelter have been provided along with volunteer, educational and office facilities.

Recent highlights have included managing a Guild initiative called Ruskin in Wyre; hosting Studio in the Woods courses for visiting craftspeople; expanding conservation grazing techniques for the Dexter cattle, supported by an annual grant from the Guild; and broadening the horizons of local schoolchildren, some from exceptionally deprived areas in local towns. Four days a week, local volunteers learn traditional rural skills such as hedge-laying.

In May 2021 the Guild’s Board held an online meeting to consider the options for Ruskin Land, which will now be explored through a feasibility study. The meeting highlighted the need for substantial investment in building repair and adaptation, for example to provide much needed accommodation; it affirmed the general direction of travel – working within the natural environment, training volunteers, holding and hosting courses and events of a distinctively Ruskinian creative character; being an exemplar of good rural landscape and forest management, working with other local owners, agencies and organisations. In all these activities the Board recalled Ruskin’s wish that his ideal place should be peaceful as well as beautiful and fruitful. Finding the right balance through good management will be vital, along with open and skilful communication to the Companions of the Guild and all who support us through partnership and funding.

In the Guild’s 150th year it is good to be able to report so many positives at Ruskin Land.