Guild Companion and Director Peter Burman reports on an affecting fortnight in Venice earlier this year.

I share here something of the expedition from which Ross Burgess, Kenny Lumsden and I have lately returned. Ross and I stayed for three nights in Padua, then eleven nights in Venice (where Kenny joined us for a week), and we enjoyed the contrast of taking a day trip by train to Treviso.

In Padua we were bowled over by the beauty of the great Basilica di Sant’Antonio and by the Capella Scrovegni with its cycle of paintings by Giotto. We spent a memorable Sunday morning at the Orto Botanico (Botanic Garden), the world’s oldest, dating from the early 16th century.

In Venice we stayed in an apartment which we love and where we have stayed several times before. It is in a block of about 1500, quite tall, on the west side of the square called the Campo di San Geremia, a five-minute walk from the railway station where trains arrive from all over Europe across a causeway from the mainland and the large city called Mestre. On previous visits we have looked out of the front windows of the apartment to the far side of the square and observed a seemingly never-ending river of humanity walking from or to the railway station along a busy street, the Lista di Spagna, crammed with tourist-oriented shops. But our corner of the Campo, tucked away to the west side of the great church of San Geremia & Santa Lucia, is tranquillity personified.

We arrived in Venice during the Carnival season, and on our first evening there were a good number of people in the streets wearing elaborate carnival costumes and traditional masks. But as a result of the coronavirus outbreak in north Italy, the Carnival was cut short, church services cancelled (even Ash Wednesday services) and all churches and museums closed from Sunday to Sunday. The river of humanity passing across the far side of our square dwindled to a thin trickle. Our observations suggested that some hotels and many restaurants were struggling to survive. Twice we were the only guests dining in a restaurant, with the waiters pleading with potential customers in the street to come in and eat. On the other hand, in Treviso, half an hour away by train, we had an absolutely splendid lunch in a justly famous restaurant Toni del Spin founded in 1883 – the restaurant was full.

Our host, Alessandro, has written to us as follows:

‘I thank you for not being afraid of the absolutely strange days we are experiencing. We all really don’t know where we are with the battle against this virus … I’m happy that you were able to visit churches and Scuole even though they were closed but only due to your special contacts in the city. The positive thing is that the city of Venice is for now returned to its citizens, a few brave tourists, and the beauty of the city shines.’

We believe there is no doubt that the city is being destroyed by tourism. The population of Venice is going down and down (currently just over 56,000). The shops are too much geared towards the supposed expectations of tourists – Carnival masks, Murano glass (not all of which comes from Murano), endless restaurants and hotels (the visitor population is often greater than the shrinking resident population). There are many other factors which relate to the impending dire situation: global warming; peculation of funds provided for managing the waters of the lagoon; the fact that the majority of craftspeople and many others who support or service the city cannot afford to live in Venice itself but across on the mainland, in or around Mestre, where there is also the highly efficient and well-designed airport. Perhaps the worst thing though is that the fame and ‘associations’ of Venice have meant that countless apartments, including whole palazzi, have been bought by the super-rich who quite often come for no more than a few days in the year. Walking along the canals on a winter’s evening it is sad to see so few lights on in the venerable buildings which line the quayside. The problems are complex and arguably intractable. But if ‘the world’ values Venice, as it says that it does, then solutions should be found. Needless to say, the city is a World Heritage City, a two-edged sword. Ruskin intuited, based on close observation and a formidable programme of fieldwork, that the city is a total work of art where the whole is greater than the sum of its parts.

We were lent for the duration of our stay a set of the three volumes of Ruskin’s Stones of Venice in original bindings of 1851 (volume I) and 1853 (volumes II and III): it was exciting to turn the pages, to read both the familiar and less familiar words, and to pore over illustrations which Ruskin had drawn, or in some cases had had photographed, himself. He was a truly great draughtsman, as was abundantly clear at the exhibition devoted to him at the Ducal (i.e. Doge’s) Palace in 2018, and the exhibition John Ruskin – the Power of Seeing at Two Temple Place in London last Spring, co-organised by the Guild of St George. Much of our visit designedly had a Ruskinian theme, and we much enjoyed seeking out some of the buildings which he had particularly enjoyed, or castigated.

I have lately become a point of contact for the Guild of St George (founded by Ruskin in 1871) with the art history, conservation and literary communities in Venice interested in Ruskin and in collaborating with us. We had two outstanding meetings, the first of which was with Demetrio Sonaglioni, Vicario of the Scuola Grande di San Rocco. The Scuola is a charity, a confraternity, somewhat like the ancient livery companies of the City of London with magnificent headquarters, an adjoining church dedicated to San Rocco, and countless artefacts. The focus of the small number of Scuole that has survived is spiritual as well as charitable. Because of the coronavirus, the Scuola was not open to the public during our stay, but our meeting gave us a uniquely special opportunity to revisit the building and deeply enjoy its 60 Tintoretto paintings and its magnificent wood carvings.

The head of the Scuola is called the Guardian Grando - we were not able to meet him this time, but he is an architect, Franco Posocco, who has a deep interest in crafts and craftsmanship, especially the building crafts. One of our aspirations is that we may be able to collaborate, Guild and Scuola, on a project which would enable reciprocal visits, seminars, craftspeople-in-residence and so forth to be organized and promoted jointly between us. The details have yet to be worked out.

Ruskin had one of his ‘Art Attacks’ (so-called wittily by Andrew Hill in his excellent book Ruskinland – how John Ruskin shapes our world) on studying the Tintorettos in the Scuola di San Rocco. He had another ‘Art Attack’ on first encountering the paintings of Carpaccio and so we were delighted that we could see the newly conserved cycle of paintings in the Accademia which depict the Life and Martyrdom of Saint Ursula. For some years these paintings have been the subject of deep study and extensive cleaning and conservation. The result really ‘sings’, and enables us to experience the paintings in a state of quite outstanding freshness and beauty. We were also able to see the cycle of paintings about St George, St Tryphone and St Jerome in the Scuole of San Giorgio degli Schiavoni. The paintings are in the Scuola’s downstairs hall at a height where they can be read as a coherent sequence. They are in the process of being conserved. The representation of St George, the dragon and the princess, is particularly fine. Ruskin chose it to be the symbol of his Guild of St George.

Our other meeting was in the Archivio bar with Professor Emma Sdegno of the Department of Linguistics and Comparative Cultural Studies, Università Ca’Foscari, Venice, a great Ruskin scholar, a Companion of the Guild of St George, and a Consorella of the Scuola Grande di San Rocco. 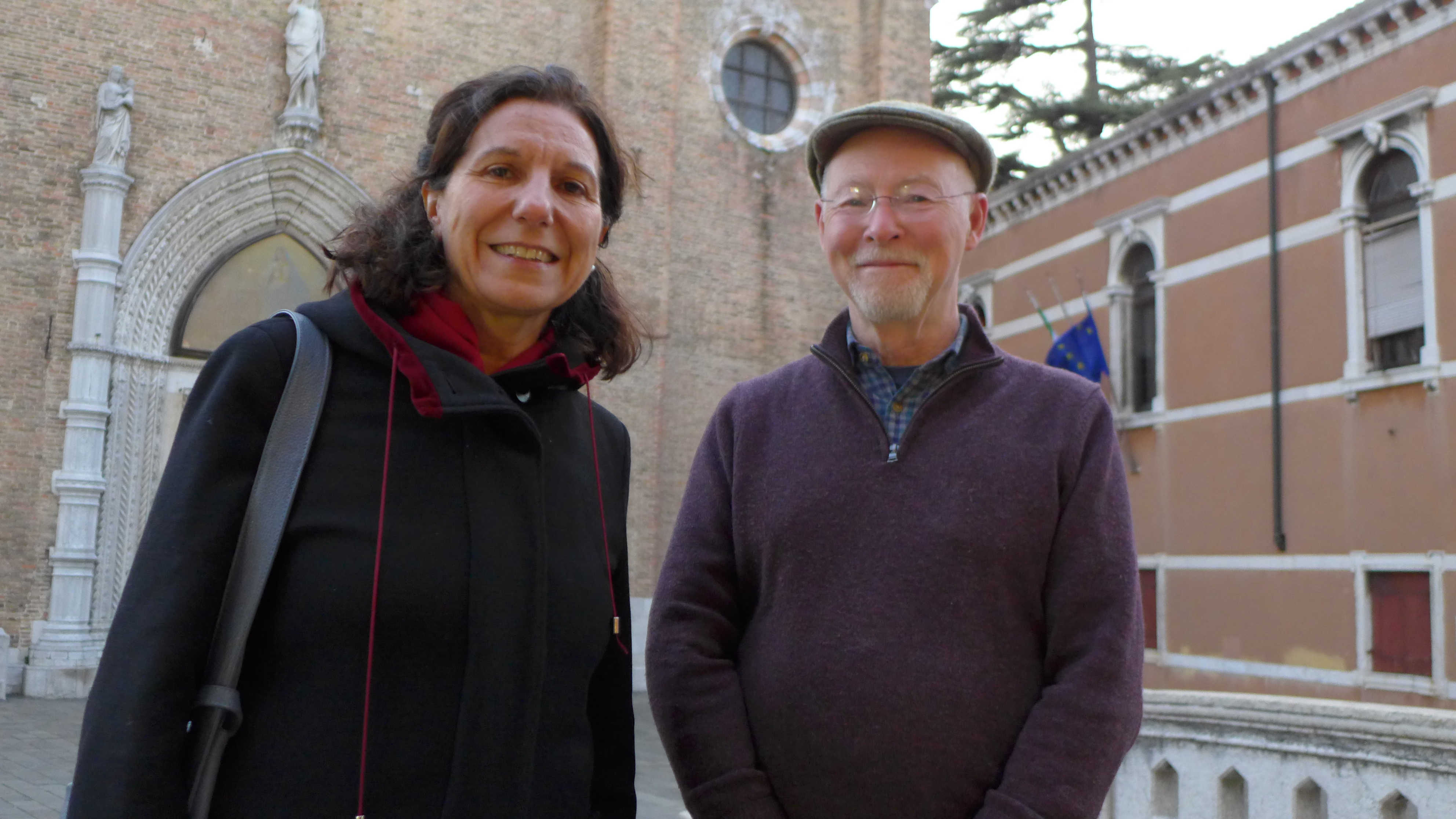 But I shall long remember that time when we sat in the north transept of San Marco when it was closed to visitors but open for prayer. We could feel the full force of Ruskin’s perception that ‘… the greatest glory of a building is not in its stones, nor in its gold. Its glory is in its Age, and in that deep sense of voicefulness, of stern watching, of mysterious sympathy … which we feel in walls that have long been washed by the passing waves of humanity.’