A Symposium on the occasion of the exhibition JOHN RUSKIN - THE STONES OF VENICE at the Ducal Palace, Venice.

An overview of the Venice week, by Guild Master Clive Wilmer 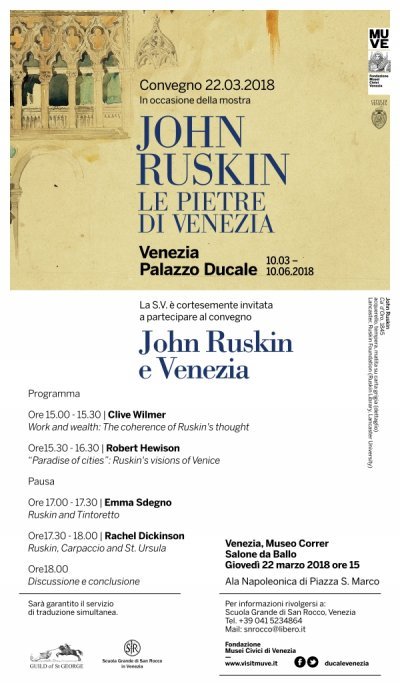 In March 2018, the Guild arranged a four-day visit to Venice, the occasion being the remarkable exhibition John Ruskin: Le pietre di Venezia at the Ducal Palace. This was inevitably a great occasion: the first-ever exhibition of Ruskin in Venice, held in what he called ‘the central building of the world’. For the Curator, Professor Anna Ottani Cavina, it represented the return of Ruskin to Venice: a welcome back to the man who did so much to save and justly estimate the city and its treasures. 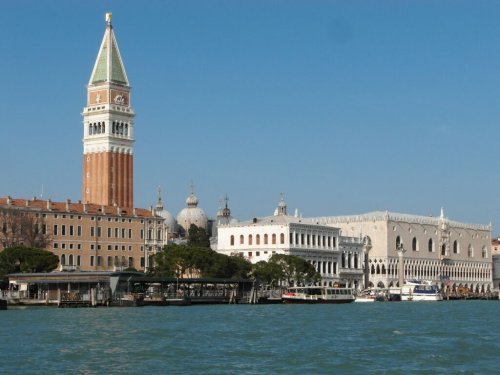 Between 21st and 24th March, some thirty Companions, four Guild employees and twenty-five guests gathered in Venice for a variety of events, centring on the exhibition. Since 2015, Companion Emma Sdegno and I have been working to create a collaborative relationship with the Scuola Grande di San Rocco in Venice. In 2015 the Guild and the Scuola held a Colloquy in the Scuola’s building and, the following year, the Guild was visited in Sheffield by a delegation from the Scuola, who saw the Collection and the third Triennial exhibition before travelling to York and Lincoln to see the Cathedrals there. On that occasion and on several occasions since, the Guardian Grando of the Scuola, Franco Posocco, has made it clear how warmly he favours collaboration with the Guild and how much he admires Ruskin.

The Guild’s visit began on 21st March with a tour of the exhibition which I had been asked to lead. The exhibition has two main strands. It documents Ruskin’s engagement with Venice – particularly medieval Venice – in visual terms, and it also provides a substantial selection of Ruskin’s other drawings and watercolours arranged thematically. The first strand is marvellously amplified in the Palace Museum where the original columns and capitals of the ground floor arcade are kept, having been replaced by replicas on the site. An imaginative new lay-out for these rooms includes engravings and quotations from Ruskin’s books.

The tour was followed by another Colloquy at the Scuola Grande and a dinner for both organisations hosted by the Guild. The speakers at the Colloquy were Franco Posocco, his deputy Demetrio Sonaglioni , Emma Sdegno, Laura Forlati, Ruth Nutter (speaking on Sheffield), Director Jenny Robbins (speaking on the Wyre) and myself.  At the dinner, I was happy to welcome Franco, Demetrio and Laura as new Companions of the Guild. 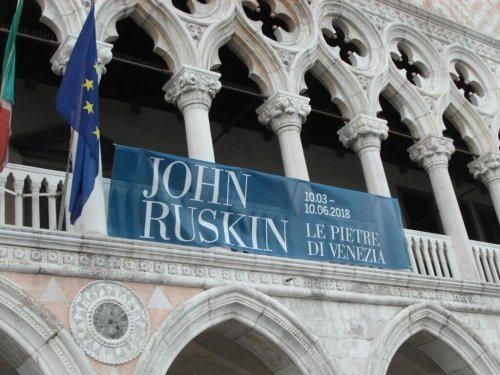 The following day, in the ballroom of the Museo Correr in Piazza San Marco, there was a book launch for Emma Sdegno’s selection of Ruskin’s writings on Tintoretto, Looking at Tintoretto with John Ruskin. This book, funded by the Scuola and published by the Venetian publisher Marsilio, is one all Ruskinians will want to own. The main speech on this occasion, which justly praised both Ruskin and his editor, was given by Companion Jeanne Clegg. That afternoon in the same venue, the Guild hosted a symposium called John Ruskin and Venice. This event, attended by 246 people including the Guild visitors, was addressed by Emma, Director Rachel Dickinson, the keynote speaker, Professor Robert Hewison and me. It was an attempt to introduce a largely Italian audience to the role of Venice, its buildings and its artists, in Ruskin’s work.

On 23rd March, the Directors of the Guild were honoured to hold our quarterly Board meeting in the Cancelleria of the Scuola San Rocco and, that evening, in Ruskin’s honour, the Scuola hosted a splendid concert of music with British and Romantic associations in the great hall of their building. On the morning of the last day, 24th March, three Companions, Jeanne, Christopher Newall and I led tours of places discussed by Ruskin, each of them based on a Venetian Scuola – San Rocco, San Marco and San Giorgio.

In the course of these days the Guild deepened its connection with the city. The exhibition was the inspiration of Gabriella Belli, who directs the Foundation for the Civic Museums of Venice (MUVE), her purpose being to invite Ruskin back into Venice – into the very centre of the city – to acknowledge the great work he did for Venice in evaluating its great cultural achievement and in helping to save and conserve its medieval heritage. In creating the exhibition and accepting the Guild’s proposal for a symposium, she and her colleagues acknowledged the importance of Companions as the immediate heirs of Ruskin’s legacy. In all this they were encouraged by Franco Posocco and the Scuola Grande, who are determined to persist with this alliance, indeed this friendship. It is the firm intention of the Guild and its Directors to reciprocate in kind.